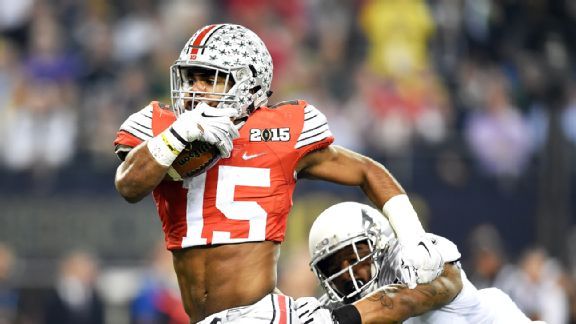 Ezekiel Elliott rushed for 246 yards -- a national championship game record -- in the Buckeyes’ win.Much of the attention heading into Monday’s College Football Playoff National Championship Presented by AT&T was centered on Ohio State’s backfield. That was a key area, but the attention, as it turned out, should have been on two players.

Elliott gained 246 yards and four touchdowns on 36 rushes, setting national championship-game records (since the BCS era began in 1998) for rushing yards and touchdowns. Texas’ Vince Young and USC’s LenDale White rushed for three touchdowns each in the 2006 Rose Bowl.

With his third consecutive 200-yard rushing game, Elliott also broke Ohio State’s bowl record for rushing yards, surpassing the mark of Raymont Harris, who had 235 yards in the 1993 Holiday Bowl in 1993.

Jones, thrust into the starting quarterback job after injuries to Braxton Miller and J.T. Barrett, didn’t play like a third-string quarterback. He entered the game with two career starts. That is the fewest starts for an official championship-winning quarterback, beating the 12 starts of Alabama’s AJ McCarron (2012 season), LSU’s Matt Flynn (2008) and Tennessee’s Tee Martin (1999) before the championship game.

Jones continued the type of play that had led Ohio State to 101 points in his first two starts. The 6-foot-5, 250-pound sophomore completed 16 of 23 passes for 242 yards with one touchdown and one interception.

The interception came on a drop when Oregon’s Danny Mattingly nabbed a bobbled ball at the end of Ohio State’s first drive of the third quarter. That interception was part of the Buckeyes’ minus-3 turnover margin, a stat that Ohio State is alone in being able to overcome in a championship game.

Led by Heisman Trophy winning Marcus Mariota, Oregon took the opening kickoff and drove for a 7-0 score. Mariota finished with 24 completions on 37 passes (two touchdowns, one interception), but he became the latest current Heisman winner to lose in the championship game.

Ohio State’s win probability at halftime, leading 21-10, was 84 percent (Oregon’s was 16 percent). The Ducks ranked second in the FBS with on average an 80 percent chance to win at the half and never had lower than a 30 percent halftime win probability this season. … Ohio State improved its record under coach Urban Meyer when an underdog to 6-0. … The Buckeyes have trailed in four of their past five bowl wins.