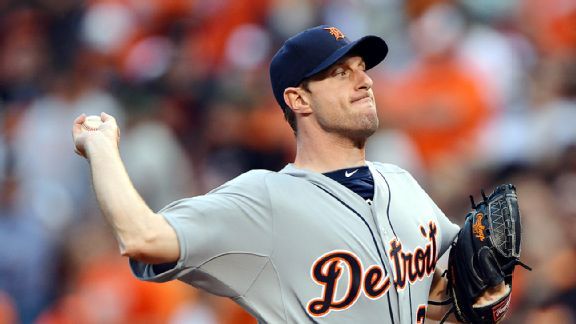 Max Scherzer was among the 2014 leaders in strikeout and miss percentage among qualified starters.Max Scherzer reportedly has agreed to a seven-year contract with the Washington Nationals, according to multiple media reports. Scherzer will join a rotation that led the major leagues in ERA in 2014.

The deal is for $210 million with half deferred, according to multiple reports. Scherzer reportedly will receive $15 million annually for 14 years. The deal also includes a record $50 million signing bonus, a person familiar with the negotiations told The Associated Press.

The three largest contracts given to pitchers in terms of total value before Scherzer’s deal were $215 million to Clayton Kershaw, $180 million to Justin Verlander and $175 million to Félix Hernández. The Nationals' deal with Scherzer, if reports are correct, would become the second-richest for a pitcher in baseball history, but the richest for a free-agent pitcher.

Scherzer excels in getting misses on swings against his off-speed stuff. Scherzer got batters to miss on 33 percent of their swings against his slider on two-strike counts in 2014, above the American League average. This led him into the top 10 in Major League Baseball in strikeout and miss percentage among qualified starters.

The Nationals and the Detroit Tigers finished 2014 ranked below the league average in strikeout and miss percentage among starting pitchers. The Nationals ranked 24th and 18th, and the Tigers 26th and 21st, respectively.

What a rotation the Nationals could run out there this season. All five starters – Scherzer is projected to join Stephen Strasburg, Jordan Zimmermann, Doug Fister and Gio Gonzalez - posted an ERA of 3.57 or lower, and all but Gonzalez were in the top 20 in baseball in strikeout-to-walk ratio last season.

Scherzer’s 12.7 wins above replacement the last two seasons rank third among pitchers, behind Kershaw and Chris Sale, both of whom are currently locked into long-term contracts.

Scherzer reportedly turned down a contract extension offer from the Tigers worth $144 million before the 2014 season. The contract uncertainty didn’t appear to affect his performance. He registered statistics that were similar to those from his Cy Young performance from 2013. In 2013, his fielding independent pitching was 2.74; it was 2.85 last season. In 2013, his strikeout percentage was 28.7 percent; it was 27.9 percent last season.