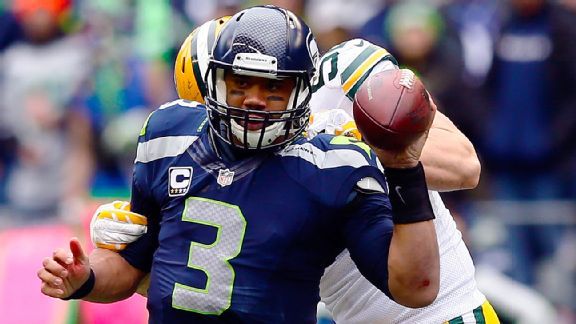 Russell Wilson had one of his worst games Sunday, facing a defensive plan he rarely has seen.Russell Wilson ultimately came through for the Seattle Seahawks in the NFC Championship Game on Sunday with his game-winning touchdown pass in overtime.

Before that pass, however, Wilson was in the midst of one of the worst games of his career. His 13.6 Total QBR is his second-worst single-game mark.

The Green Bay Packers played defense against Wilson in a way most teams haven’t, so what can the New England Patriots take away from the Packers’ game plan?

Wilson has been one of the most prolific and successful quarterbacks out of the pocket this season and in his career. But in the NFC title game, Wilson threw 27 of his 29 passes -- including all four of his interceptions -- from inside the pocket, and was limited to 10 rushing yards on three scrambles.

Since entering the NFL in 2012, Wilson has 89 more passes from out of the pocket than any other quarterback, and he hasn’t thrown an interception on such passes in his past 32 games. He also leads the NFL in scrambles (153) and scramble yards (1,264) since he entered the NFL, averaging 9.8 yards on scrambles this season.

Wilson can’t extend plays as easily in the pocket and has to depend more on his receivers’ route-running. Seahawks wide receivers rank 29th in yards and 31st in receiving touchdowns this season.

But how did the Packers keep Wilson in the pocket?

Most teams attempt to blitz Wilson, doing so on 36 percent of his career dropbacks. Only Jets quarterback Geno Smith (38 percent) has been blitzed more frequently in the past two years.

The Packers went the other direction, sending four or fewer pass-rushers on 81 percent of Wilson’s dropbacks Sunday. That’s the highest percentage Wilson has faced this season and the highest he has faced since the 12th game of his career.

One of the few times the Packers did choose to blitz Wilson was on his game-winning touchdown pass in overtime.

Another effect, maybe unintended, was that the Packers pressured Wilson on 24 percent of his dropbacks Sunday, the lowest percentage against Wilson this season.

Wilson seemingly thrives when under duress: He has been pressured on 36 percent of his dropbacks in his career, easily the highest in the NFL in the three seasons he has been in the league, and is 22-2 in such situations. He’s 20-11 when taking pressure below his average. (Records include the postseason.)

Besides the Packers' five sacks of Wilson, one of the few times they pressured him was on Seattle's successful two-point conversion attempt toward the end of regulation.