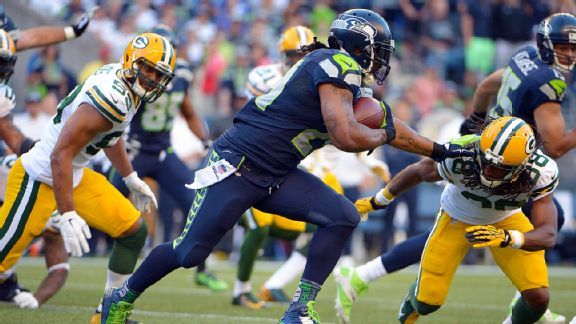 Marshawn Lynch’s average yards after contact is higher in the postseason than in the regular season.Marshawn Lynch rushed for 157 yards and totaled 183 yards from scrimmage in the NFC Championship Game against the Green Bay Packers to lead the Seattle Seahawks to the Super Bowl.

Both totals were career highs for Lynch and highly valuable in a game Russell Wilson posted the second-worst Total QBR (13.6) of his career.

Lynch will look to cap a career-best season with another big performance in Super Bowl XLIX against the New England Patriots.

Lynch has rushed for 1,000 yards and scored double-digit touchdowns in every full season he has played with the Seahawks, but the 2014 season has been his best.

Of course, Lynch is best known for his physical running style. He averaged 2.53 yards after contact on 280 rushes this season. ESPN Stats & Info’s yards-after-contact data goes to 2009, and in that time there have been two instances of a player rushing 200 times and averaging more yards after contact –- and that includes Adrian Peterson’s MVP campaign in 2012.

Key to the Seahawks

As Lynch goes, so do the Seahawks. Including playoffs, the team has gone 39-11 (.780) in games Lynch scores a touchdown and is 14-0 when he scores at least twice. When Lynch doesn’t score, the Seahawks have gone 16-18 (.471, including playoffs), and that doesn’t include the one game Lynch missed since Seattle acquired him (a loss).

Lynch has 815 career yards rushing in the postseason, which ranks 13th all time. He needs 77 yards to pass Larry Csonka and move up to eighth. If Lynch does so, he’ll be behind six Hall of Famers (Emmitt Smith, Franco Harris, Thurman Thomas, Tony Dorsett, Marcus Allen and John Riggins) as well as former Super Bowl and NFL MVP Terrell Davis.