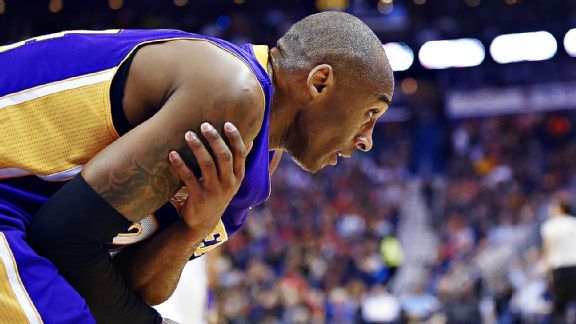 The Lakers are 14 points per 100 possessions better with Kobe off the court this season than they are with Kobe on the court. Among all players with at least 1,000 minutes this season, only Kobe's teammate Jordan Hill has had a more negative effect on his team's production than Bryant himself.

Kobe ranks among the worst players in the league this season in a number of categories:

Kobe's 0.1 win shares are the fewest of the 73 players to play at least 1,200 minutes this season. Win shares are an estimate of the number of wins a player contributes to his team based on his offense and defense.

Among the players with more win shares than Kobe this season are:

If Kobe misses the rest of the season, he will have the worst field goal percentage (37.3) in the last 50 seasons for a player who averaged at least 20 points per game. The current mark belongs to Allen Iverson, who shot 38.7 percent in 2003-04.

After the injury news dropped on Thursday, the All-Star Game starters were announced, and Kobe is among them. The numbers show that some very good Western Conference guards did not make the cut as starters. Russell Westbrook, James Harden, Chris Paul, Damian Lillard and Klay Thompson all rank in the top 25 in PER, while Kobe ranks 74th.