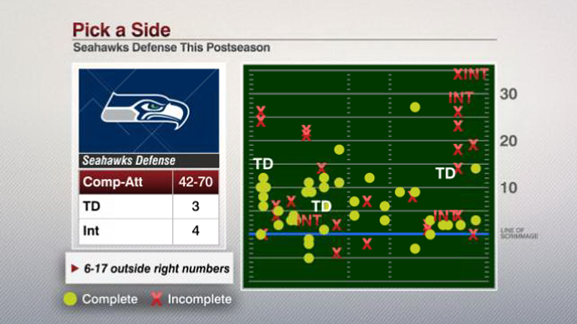 The New England Patriots’ game plan seemingly changes week to week based on their opponent’s strengths and weaknesses.

In the divisional playoffs, the Patriots went an entire half without handing off the football to a running back. In the AFC Championship Game, the Patriots rushed 40 times for three touchdowns.

The Seattle Seahawks provide the Patriots their biggest challenge to date. The Seahawks led the NFL in points and yards allowed the last two seasons, the first team to do so since the 1985-86 Chicago Bears.

So how should the Patriots’ offense approach the Seahawks’ defense?

Richard Sherman has lined up on the offense’s right on 99 percent of his snaps this postseason, and his presence has made passing to that side a problem for opposing offenses.

When targeting receivers outside the right numbers against the Seahawks this postseason, opponents are 6-of-17 (35 percent) with a touchdown (Randall Cobb) and three interceptions (two by Sherman). Of the six completions, four were thrown within five yards of the line of scrimmage.

On passes to the rest of the field this postseason, the Seahawks have allowed a 68 percent completion percentage and two touchdowns and have one interception.

When the Patriots played the Seahawks in 2012, Tom Brady was 3-of-10 with a touchdown and an interception throwing outside the right numbers.

At the time, Sherman was in his second year and emerging as a star. Brady didn’t avoid him much then, but he might this time if the divisional playoffs are any indication.

In the divisional playoffs, the Baltimore Ravens used inexperienced cornerback Rashaan Melvin almost exclusively on the left side (59 of 60 snaps). Brady threw 34 of his 50 passes left of the hashes.

Running against the Seahawks is key, as they allowed 139 yards on 33 rushes on average in their four losses this season (an average of 73 yards on 22 rushes in 14 wins).

The Seahawks’ rush defense is strong, however, ranking second in yards per rush allowed (3.4) in the regular season. The Seahawks are particularly strong after contact, allowing a league-low 1.35 yards per rush after the first hit.

Seahawks pass defense by target position this season (including playoffs)

The Patriots know where not to throw the ball, but to whom should they throw? Rob Gronkowski (naturally).

Gronkowski was the Patriots’ leading receiver this season and has a touchdown in five straight games, but going beyond that, tight ends have given the Seahawks’ defense issues this season.

The Seahawks allowed 11 touchdown passes to tight ends in the regular season, tied for third-most in the NFL, with six coming in their four losses.