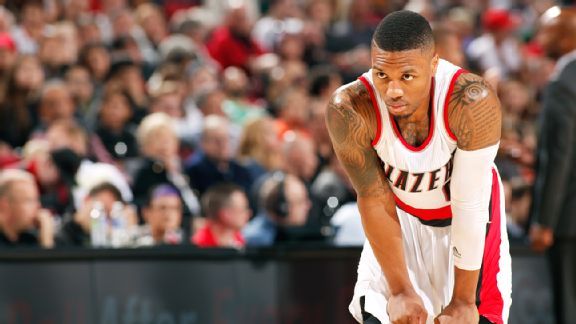 Damian Lillard leads our All-Snub list after being left off of the 2014-15 NBA All-Star team.

The same scenario arises every season when the All-Star selections are announced: Several deserving players are left off the team. According to win shares -- what Basketball-Reference.com defines as an estimate of the number of wins a player contributes to his team -- here are the top five players who did not make the original All-Star cut.

Lillard ranks sixth in the league in win shares and joins DeAndre Jordan as the only two players ranked in the top 18 to not make the All-Star team. Lillard is at his best late in games, as no player has scored more total points in the fourth quarter than Lillard this season.

Jordan has the most win shares of any center this season. After leading the NBA in both field goal percentage and rebounds per game last season, Jordan is the league leader in both categories again. If that holds, Jordan would join Wilt Chamberlain as the only players to lead the league in rebounds and field goal percentage in consecutive seasons.

Chandler leads the Mavericks and is eighth in the league in win shares. When he made his only career All-Star appearance two seasons ago with the Knicks, Chandler averaged 10.4 points and 10.7 rebounds per game and shot 64 percent from the field. His numbers this season are better across the board, averaging 10.5 points and 12.0 rebounds per game, with a field goal percentage of 67 percent.

By now you may have heard that Hawks sharpshooter Korver is on pace for a 50/50/90 season. He is shooting 52 percent from the field, a league-best 53 percent from the 3-point line, and 92 percent from the free throw line. Steve Kerr is the only player in NBA history to have done this (1995-96), but Kerr did not qualify for the field goal percentage leaderboard that season; Korver currently does.

Despite what most would consider a disappointing season, Love has posted more win shares this season than All-Stars Tim Duncan (4.8) and Chris Bosh (3.4). Only two Eastern Conference players match his averages of 17 points and 10 rebounds per game: All-Star Pau Gasol, and honorable mention snub Nikola Vucevic.

Note: There will be injury replacements named for Kobe Bryant and Dwyane Wade, so two of these players will have a shot to go from All-Snub to All-Star.