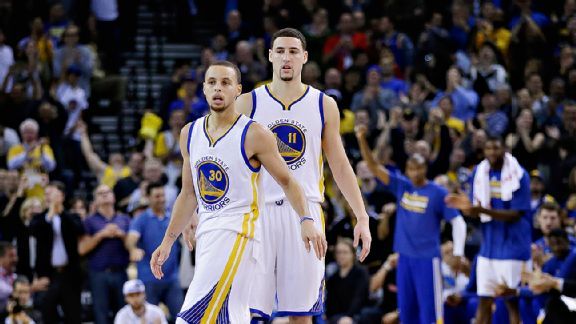 Curry and Thompson are the first teammates with 50-point games in the same season in 20 years.

Stephen Curry certainly knows how to erase a large deficit with flourish.

Twelve days after Klay Thompson scored a career-high 52 points against the Sacramento Kings, teammate Stephen Curry scored a season-high 51 points against the Dallas Mavericks on Wednesday. Of those points, 26 came in the third quarter, when the Golden State Warriors rallied all the way back from a 22-point first-half deficit to seize a lead they would not relinquish.

Here are the top things to know about Curry’s big night:

• Curry and Thompson are the first pair of teammates to record 50-point games in the same season since 1993-94, when Philadelphia’s Willie Burton and Dana Barros and Dallas’ Jim Jackson and Jamal Mashburn achieved the feat.

• Curry scored 33 of his 51 points when he was being guarded by J.J. Barea and Devin Harris, his primary defenders on 21 of his 34 plays. Curry was 11-15 from the floor in those situations.

• 38 of Curry's 51 points came on jump shots, including 23 points on jumpers off the dribble. He was 8-of-13 on contested jumpers. In the third quarter, Curry was 7-of-8 on jump shots.

• Curry’s 26 third-quarter points were the second most by a player in the NBA this season, behind only Thompson, who had a record-setting 37 against the Kings in his 52-point game.

• He lost his chance to outscore Thompson’s 50-point game on the free throw line, where he missed two free throws. It’s only the third time this season Curry missed more than one free throw in a game.