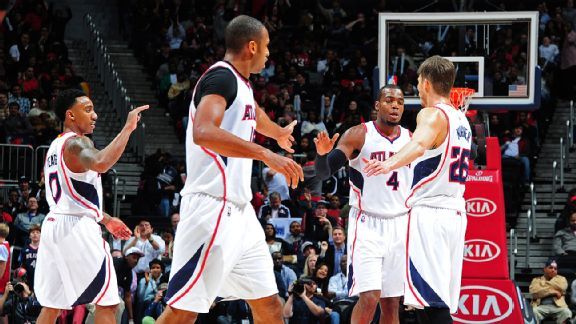 The Hawks beat the best in the West for their 42nd win of the season.It was a highly anticipated matchup between the Atlanta Hawks and Golden State Warriors and the two teams provided us with a thrilling game as the Hawks edged the Warriors by eight points.

According to Elias, it was just the second game in NBA history in which each team had a winning percentage of .820 or higher entering the game (min. 40 games).

Let's take a look at how the Hawks were able to get their 35th win in their past 38 games.

The Hawks outscored the Warriors by 21 points on

catch-and-shoot jump shots, shooting 54.5 percent from behind the arc in the process. Kyle Korver led the way with 12 of his 17 points on those attempts.

The Hawks made 15 of their 27 3-point attempts, one shy of tying their most in a game this season. The Warriors hadn't allowed an opposing team to make 15 3-pointers since

The Hawks made their free throws count as they converted a season-high 33 of 37 attempts. Jeff Teague was a perfect 11-of-11 from the line, tied for his most makes without a miss in a game in his career.

Stephen Curry finished with 26 points on the night but struggled when he was defended by Teague. Curry was 3-of-8 on jump shots when defended by the Hawks point guard. Curry's primary defenders entered the game contesting 35.1 percent of his jumpers; Teague contested all eight.

Curry and Klay Thompson were a combined 8-of-17 from beyond the arc. The rest of the team was 4-of-16 on 3-pointers.

The Hawks have another tough matchup coming up as they take on the Memphis Grizzlies on the road on Sunday. According to ESPN's Basketball Power Index, the Hawks have a 36 percent chance of beating the Grizzlies.