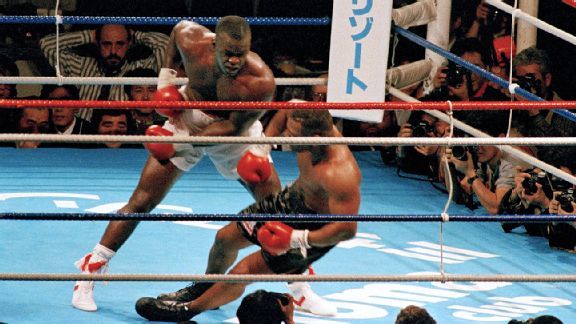 A 42-1 underdog at one sports book, Buster Douglas knocked out Mike Tyson in the 10th round.Wednesday is the 25th anniversary of Buster Douglas’ 10th-round knockout of Mike Tyson, regarded as one of the biggest upsets in sports history.

ESPN Stats & Information takes a look at the fight.

With a 37-0 record (33 victories by knockout), “Iron” Mike Tyson had by 1990 become the lineal heavyweight champion of the world. His Feb. 11, 1990, fight against James “Buster” Douglas in the Tokyo Dome was widely regarded as a tuneup for a fight against former cruiserweight champion and 1984 Olympic bronze medalist Evander Holyfield.

Tyson won his first title in 1986, defeating WBC champion Trevor Berbick inside of two rounds to become the youngest heavyweight champion in history. By 1988, Tyson won all the heavyweight titles when he defeated lineal champion Michael Spinks by first-round knockout

Douglas, ranked seventh among heavyweights by THE RING magazine, was on a six-fight win streak heading into the bout with Tyson. Douglas had fought for the heavyweight title one time, losing an IBF title fight against Tony Tucker in 1987. Many sports books did not post betting odds on Tyson-Douglas, but the Mirage in Las Vegas had Douglas as a 42-1 underdog on the night of the fight.

Douglas exploited his 12-inch reach advantage against the smaller Tyson. According to CompuBox, Douglas outlanded Tyson 230-101 in the fight (128 jabs, 102 power). In the eighth round, Tyson sent the challenger to the mat with an uppercut. Douglas got to his feet at a count of nine.

At the start of Round 10, two judges were split while the third had a draw. About a minute into the round, Douglas used his jab again to set up a right uppercut. The punch stunned Tyson and was followed up by a four-punch combination that sent the champion to the mat. As referee Octavio Meyran began to count, Tyson went to put his mouthpiece back in but could get only one side in. Tyson was counted out at 1:23 of Round 10. Douglas became the undisputed heavyweight champion of the world.

According to CompuBox, which tracked the fight live, Douglas was the aggressor in every round in terms of output and connectivity. He landed more punches than Tyson in all three categories (total, jabs, power). Armed with a 12-inch reach advantage, Douglas was the more active fighter, throwing 198 power punches to Tyson's 138, and 243 jabs to Tyson's 76.

Almost immediately after the fight, Tyson promoter Don King filed a protest, stating the referee had given a long count after Douglas was knocked down in Round 8. Whereas the IBF immediately recognized Douglas as champion, the WBA and WBC initially agreed with King and did not recognize Douglas as champion. The protest was withdrawn, and Douglas was recognized as the lineal heavyweight champion, meaning he, not Tyson, would face Holyfield.

Douglas weighed in at 246 pounds for the Holyfield fight in October 1990, the heaviest he had weighed for a fight. Douglas lost the title in a third-round knockout and retired from the ring until 1996. Douglas was 8-1 after his return but retired for good in 1999 with a record of 38 wins, 6 losses and 1 draw.

Tyson fought four more times in 1990 and 1991 before being sentenced to prison in 1992. Paroled in 1995, he returned to the ring and faced Holyfield in 1996 for Tyson’s WBA heavyweight title. Tyson lost the first matchup, and in the rematch, he lost by disqualification when he bit Holyfield’s right ear.

Tyson had one more shot at the heavyweight title in 2002 when he faced lineal champion Lennox Lewis. Tyson lost by eighth-round TKO, signaling the end of his career as an elite heavyweight. Tyson retired in 2006 with a record of 50 wins, six losses and two draws. He was inducted into the International Boxing Hall of Fame in 2011.