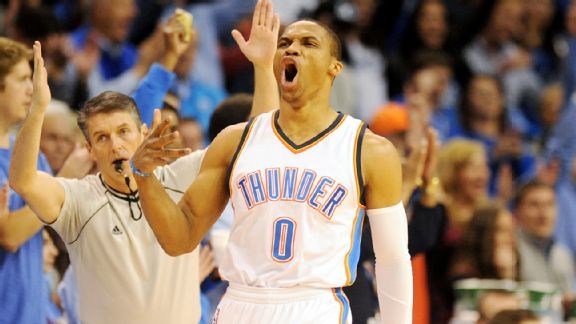 Russell Westbrook is the second player to average 30 PPG, 9 RPG and 10 APG in a calendar month.

Russell Westbrook recorded his third straight triple-double on Friday night, albeit in a losing effort to the Portland Trail Blazers. The Oklahoma City Thunder point guard just finished a month in which he posted four triple-doubles and did something only one player in NBA history has ever done. Here’s what you need to know about his historic February.

Westbrook finished the month with four triple-doubles, more than any other player has this season.

Russell Westbrook finished the month of February averaging 31.2 PPG, 9.1 RPG and 10.3 APG in 12 games. He’s just the second player in NBA history to average 30 points, 9 rebounds and 10 assists per game for a calendar month with at least 10 games played. He joins Oscar Robertson, who had eight such months in his career.

Kevin Durant missed seven games in February and Westbrook elevated his game to cover KD’s absence. He averaged a triple-double when Durant was out in February, averaging 31.2 PPG, 10.0 RPG, 11.3 APG in the seven games he missed.

Westbrook has at least 20 points and 10 assists in six straight games. According to the Elias Sports Bureau, the only other active player who has put together a streak like that is Chris Paul, who had a seven-game streak in 2008-09 for New Orleans.