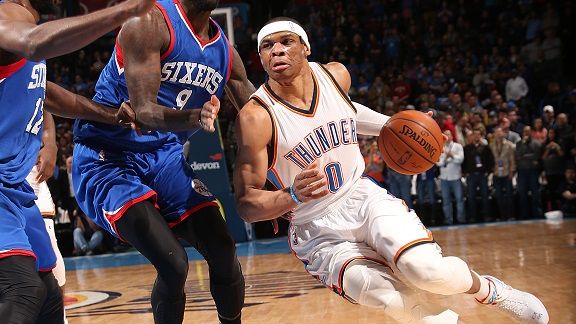 Westbrook recorded his league-leading sixth triple-double of the season (three more than the next player) and fourth straight, the longest streak since Michael Jordan had seven straight during the 1988-89 season. That is tied for the fourth-longest triple-double streak over the past 50 seasons. Wilt Chamberlain holds the record with nine straight during the 1967-68 season.

This is the second straight game in which Westbrook

scored at least 40 points in a triple-double. According to Elias Sports Bureau research, only two other players accomplished that feat in NBA history: Michael Jordan and Pete Maravich.

Westbrook has three triple-doubles this season in which he has scored at least 35 points. The rest of the NBA has combined to do so zero times.

Vince Carter is the only other player to post 45 points, 15 rebounds and 10 assists in a game over the past 30 seasons. He did so as a member of the Nets in a win against the Wizards in 2007.

Wednesday night marked the fifth time this season in which Westbrook was the Thunder's outright leader in points, rebounds and assists. He is the league leader in that department and all five games have come since this great run began to start February.

Westbrook finished with 10 assists, his 15th double-digit assist game of the season. Those 10 assists resulted in 23 Thunder points. Add the 49 points he scored, and Westbrook was responsible for 72 of his team's 123 points. That is the second-most points he has contributed in a game this season.

No real surprise Westbrook posted a triple-double against the 76ers. Including Wednesday night, Philadelphia has allowed a league-leading nine triple-doubles over the past two seasons. Westbrook has two of the nine.