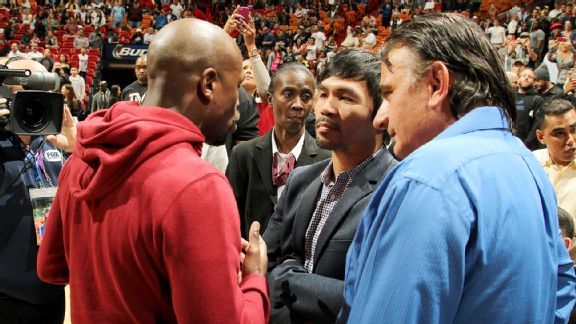 Floyd Mayweather Jr. and Manny Pacquiao encountered each other at an NBA game in January.

Tale of the tape

The only face-to-face appearance of Floyd Mayweather Jr. and Manny Pacquiao before fight week is scheduled for 4:30 p.m. ET Wednesday at the news conference advancing the highly anticipated and long-awaited matchup.

In ESPN’s pound-for-pound rankings, Mayweather is No. 1 and Pacquiao is No. 2.

Mayweather, a two-time fighter of the year (2007, 2013), has won world titles in five weight classes -- one of five fighters to do so. He has a record of 47-0 with 26 knockouts. Twenty-four of those victories have come in world title fights.

The news conference at Nokia Theatre at L.A. Live in Los Angeles will be the first public meeting since their brief encounter at the Bucks-Heat NBA game on Jan. 27.

On Jan. 14, before the fight was announced, Mayweather was a minus-350 favorite (an implied 75 percent win probability), and the line has steadily moved in Pacquiao’s favor since then.

Along with the fighters, some of the key figures who are expected to be at the news conference:

• Leonard Ellerbe (Mayweather Promotions CEO, Mayweather’s promoter): has been a part of Mayweather’s camp since his pro debut in 1996

• Stephen Espinoza (Showtime executive vice president and general manager of Showtime Sports): in charge of all boxing events related to Showtime Sports; Mayweather has an exclusive contract to fight for Showtime.

• Ken Hershman (HBO Sports president): in charge of all boxing events related to HBO Sports; Pacquiao has an exclusive contract to fight for HBO.

• Richard Sturm (president of MGM Resorts): The May 2 Mayweather-Pacquiao fight will be at the MGM Grand.

Tickets have not gone on sale for the fight, but according to Forbes, they are expected to start at a minimum of $1,000. Ringside seats are expected to have a face value of $5,000, and they might not be available to the general public.

The event is expected to double the largest boxing gate in Nevada State Athletic Commission history, set in 2013 when the Mayweather-Saul Alvarez fight garnered $20 million in live gate sales. There will be no complimentary tickets given to celebrities and dignitaries, according to reports.