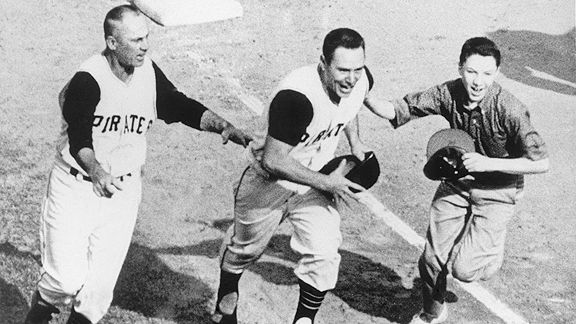 Bill Mazeroski's home run in Game 7 of the 1960 World Series might be the most famous homer in the Fall Classic. But by statistical evaluation, another home run from that game is more valuable.

Fifty years ago this month, a Pittsburgh Pirates player hit the most important home run in World Series history late in Game 7 of the 1960 Fall Classic against the Yankees. This home run was by far the biggest reason why the Pirates won that game and their third World Series title.

But that home run wasn’t hit by Bill Mazeroski.

How is it possible that Mazeroski’s home run -- generally considered the biggest in World Series history, if not all of major league history -- is not even the biggest home run in its own game?

Before we get into the identity of the forgotten Pirates hero, let’s take a step back. What is an important home run within the context of the World Series?

Fortunately, we have some statistical tools that can help us determine the value of each home run in World Series history in terms of how much it helped the team win the series. Win probability added (WPA) looks at the impact of each play on the game level and can be found on Baseball-Reference.com, among other places.

A team’s win probability in a given situation can be calculated based on historical win percentages for teams in similar situations as described by the score, inning, number of outs and the runners on base.

To get WPA for a play, you look at the team’s chance of winning before the play occurred and subtract it from the chance of winning after the play. A home run in an 11-0 blowout will add much less win probability than that same home run late in a tie game.

While WPA is a great tool, the overall objective is to win the series as opposed to winning each individual game. We need to look at how much that play increased a team’s chances of winning the series, as opposed to just the game.

To adjust for this second level of leverage, we need to find a way to go from “Game WPA” to “Series WPA," or the change in the probability the team would win the series from before the play to after the play. Series WPA can be expressed as a product of Game WPA and the leverage of the game in the series.

Mazeroski’s home run has a Series WPA identical to its Game WPA of 37 percent because in Game 7 winning the game and winning the series are exactly aligned -- one cannot happen without the other. Had that home run happened in Game 1 of the series -- a game with a leverage of .308 -- it would have had a Series WPA of 11.4 percent.

These home runs rated No. 6-10 on our Series WPA ranking

Let’s count down the top five home runs in World Series history in terms of Series WPA. Not surprisingly, because of the higher leverage of later games in close series and particularly Game 7, most of the impactful home runs on the list come in Games 6 and 7. And, as you know, we’ll have a surprise No. 1 on this list since it’s not Mazeroski.

Hall of Famer Willie Stargell’s final postseason game was a memorable one, as he went 4-for-5 to lead the Pirates to a Game 7 victory on the road in Baltimore.

The most important hit came in the top of the sixth inning, as Stargell hit a two-run shot off Orioles starter Scott McGregor to turn Pittsburgh’s 1-0 deficit into a 2-1 lead. The Pirates would not relinquish the lead their star first baseman gave them and would win the game and the series, with Stargell being named MVP.

Holding a 6-5 lead with one out in the bottom of the ninth and closer Mitch Williams on the mound, the Phillies looked poised to force a decisive Game 7 against the Blue Jays. But with runners on first and second, Joe Carter drove a 2-2 pitch out of the park to lift Toronto to an improbable, walk-off victory and its second straight World Series title.

Before any of Pittsburgh’s heroics later in this Game 7, Yogi Berra’s sixth-inning blast to right field turned a 4-2 Yankees deficit into a 5-4 lead. The Yankees had a 64 percent chance of winning the game afterward, but because of the next two homers, Berra’s home run is a mere footnote.

Bill Mazeroski’s home run is what every young kid playing baseball dreams of in his backyard: hitting a walk-off home run in Game 7 to win your team the World Series. Even though this home run actually falls well short of first place in terms of Series WPA, it clearly was an extremely valuable contribution from an unexpected source.

Mathematically speaking, taking your team from a 63 percent chance of winning the game and the series to a 100 percent chance is still a huge impact with just one swing of the bat.

Hal Smith has a legitimate gripe as being the most unknown World Series hero ever. Smith, who took over as catcher in the eighth inning of this game, hit a three-run home run to left field off Jim Coates with the Pirates down 7-6 and two outs in the bottom of the eighth.

This took the Pirates from having a 30 percent chance to win the game before the home run to being more than 90 percent favorites after Smith touched home plate. Consider now that this was in Game 7 and you have a home run that has a Series WPA 27 percentage points higher than any other home run in World Series history.

For those of you who are still bewildered that this home run that didn’t actually “win the game” ranks ahead of Mazeroski’s later walk-off series-winner, consider the following:

• Smith’s home run came with the Pirates trailing by one. If he doesn’t hit it, the Pirates have either three or four outs (depending on whether Smith made an out or not) to score at least one run to prolong the game.

• Not only that, but Smith’s home run didn’t just tie the game or give Pittsburgh a one-run lead; it put them up two runs, which is a pretty nice cushion with the Yankees having just three outs remaining. Mickey Mantle’s RBI single and Yogi Berra’s RBI groundout in the top of the ninth did erase this short-lived lead, but they do not take away from the fact Smith took the Pirates from an underdog to an overwhelming favorite before the pitching gave the lead back.

• Mazeroski’s home run came with the game tied and no outs in the bottom of the ninth. If he doesn’t hit it, the Pirates are still in decent shape: two or three more outs to go in the ninth to try to win it there and if not, still around a 50-50 chance to win if it goes to extra innings. While Mazeroski’s home run still had a profound impact, it actually came in a less “dire” situation than Smith’s just one inning earlier.

Essentially, because of the strange sequence of events following Hal Smith’s home run in Game 7 of the 1960 World Series, he doesn’t go down as an October hero with an iconic moment like the Mazeroskis, Carters and Gibsons of the world.

And the rest of Smith’s MLB resume -- 10 seasons with five different franchises, three games in the 1960 World Series comprising his only postseason action -- also fails to help his cause in that regard.

But when you look at it objectively, Smith’s home run was the greatest in the history of the Fall Classic. Even if few remember that it happened.