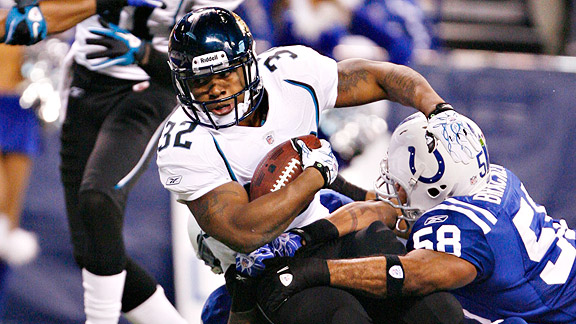 The Colts defense wrapped up Maurice Jones-Drew repeatedly on Sunday, a major key to their victory over Jacksonville.

Needing a win to regain control of the AFC South, the unlikeliest of units stepped up in a big way for the Indianapolis Colts in Week 15.

The Colts much-maligned run defense, which entered the game ranked 29th in the NFL, held the Jacksonville Jaguars to just 67 rushing yards, more than 90 below their season average entering Week 15.

Indianapolis crowded the line vs Jaguars running back Maurice Jones-Drew, putting eight or more men in the box on 45 percent of the Jaguars 22 rushing attempts. The last time the Colts stacked the box with at least eight defenders on at least 45 percent of an opponent’s rushes was in Week 8 of 2008 against Chris Johnson, LenDale White and the Tennessee Titans.

Of course, the most brilliant defensive scheme will fail if it’s not executed properly. But the Colts bottled up the Jaguars rushing attack when crowding the line of scrimmage, holding Jacksonville to just 15 yards on their 10 rushes against at least eight in the box.

Entering the game, the Jaguars were averaging 4.6 yards per rush against defenses with at least eight defenders in the box, fourth-best in the league, so Sunday marked a significant decline in performance. Jones-Drew, who entered with six straight 100-yard games, rushed for just 46 total yards on 15 carries.

Broncos happy to not see Raiders for rest of 2010

In arguably the most forgettable defensive season in Broncos history, Denver’s unit has been at its worst in two losses to the Raiders, surrendering 98 points and more than 1,000 yards its division rivals. The last time the Broncos allowed 98 points to an opponent in a single season was 42 years ago, when the 1968 Chargers ran up 102 points in a pair of wins vs Denver.

Oakland did the majority of its damage vs the Broncos on the ground, totaling 592 rushing yards and eight touchdowns. According to the Elias Sports Bureau, Denver is the first team to allow eight rushing touchdowns to an opponent in a season since 2004 Falcons. (If it makes Broncos fans feel any better, the eight rushing scores the Falcons allowed to the Chiefs that season all came in their Week 7 meeting, making the Falcons the first team to surrender eight rushing scores in a game since the 1923 Rochester Jeffersons.)

With a 3-11 record and the more productive half of the Batman and Robin duo out for the season, the Bengals aren’t exactly the center of the NFL world entering Week 16. But rookie defensive end Carlos Dunlap deserves attention for his strong play down the stretch.

Most Sacks By Rookie
Bengals History

Dunlap has an NFL-best six sacks since Week 12, including a pair last Sunday that knocked the Browns out of field goal range at the end of the first half and stalled a Cleveland drive midway through the fourth quarter. Over the last four games, Dunlap has more sacks (six) than all but two players did in their entire rookie seasons with the Bengals (James Francis in 1990, Justin Smith in 2001).