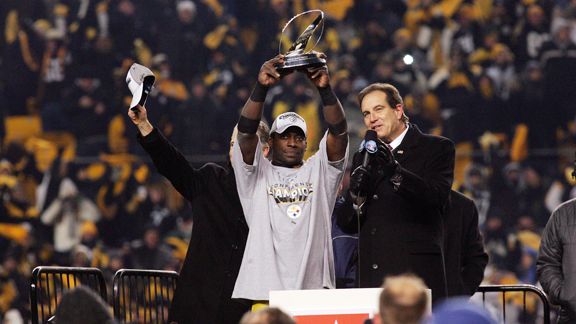 The Steelers hope for one more trophy raising to continue their statistically amazing run of success.

Mathematically speaking, how amazing is the Pittsburgh Steelers' postseason success? A closer look at the numbers shows us that what they’ve done is highly unlikely.

Estimated Probability (since 1970)
Playoff Advancement In A Given Season

Dividing each of those numbers into 29 gives the average probability of any team making to any of those rounds in a given season.

In those 41 seasons, the Steelers have made the Divisional Playoffs 22 times, the Conference Championship Game 15 times, and the Super Bowl eight times.

They’ve won the Lombardi Trophy six times with a possible seventh coming on February 6. Pittsburgh has the most appearances in each of these rounds among all NFL franchises since the merger (the Steelers are tied with the Dallas Cowboys in Super Bowl appearances with eight).

If you assume seasons are independent from one another, then you can calculate the probability of a given team making so many appearances in each of those playoff rounds using the single-season probabilities above. While clearly seasons aren’t independent, assuming so is valid for these calculations because each team starts each season 0-0 and therefore has the same “built-in” chance of making any given round of the playoffs at the beginning of the season.

These extremely low probabilities -- less than 0.7 percent in each case -- show that the Steelers’ record of success is truly amazing. It is simply not probable that a given franchise could have this much repeated postseason success in an over four-decade span.

Looking ahead to a potential Steelers win, the chance of the same team winning seven (or more) Super Bowls in 41 seasons under these assumptions is a miniscule 0.000464, or less than five in 10,000.

So if the Steelers win against the Packers in a couple of weeks to get their seventh Super Bowl ring, they will extend their statistically amazing dominance of the NFL even further.