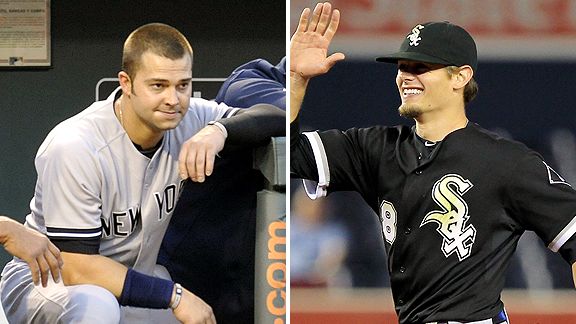 Nick Swisher came up just a bit short on a game-saving catch attempt, but Brent Lillibridge (right) was able to celebrate after his clutch defensive performance.

You might remember on April 5 when Delmon Young had his game-tying three-run double in the eighth inning of the Minnesota Twins eventual extra-inning win over the New York Yankees. Right fielder Nick Swisher came within a hair of making a game-saving diving catch. Instead, the ball fell just beyond his reach and the Twins tied the game and went on to win the contest a few minutes later.

On Tuesday, in a spot not far from that just-miss, Chicago White Sox right fielder Brent Lillibridge made a diving catch of Robinson Cano’s line drive to end a win over the Yankees. Lillibridge gambled with an all-or-nothing dive and came up successful. Had he missed, as Swisher did, the ball would have likely rolled by him for a walk-off two-run double.

We asked Ben Jedlovec at Baseball Info Solutions (BIS) to take a closer look at both of those plays, to help us quantify the difference between an out and a hit. The results were quite intriguing.

BIS charts every play of every game, using television telecasts to evaluate where on the field every play in a game is made. They use a timer to time how long every fly ball and line drive is in the air, allowing them to compute how often balls hit to certain spots on the field go for hits or outs.

Base Hit Frequency
Balls Hit to Spot of Young's Double

Young’s fly ball had a hang time of 4.4 seconds. BIS was able to determine that a ball hit to a spot within a 10 foot by 10 foot zone of that hit location was a base hit approximately 57 percent of the time at that hang time within the last year. So Swisher wasn’t the only player to miss out on a ball hit into that zone.

To show you the impact that the hang time of a fly ball has on a play, check out the chart on the right, provided the day after Young got his game-tying hit. Had that ball been in the air a few tenths of a second longer, it’s almost certainly an out.

On the other end of the spectrum is Lillibridge’s play. Cano’s line drive stayed in the air for just under 2.5 seconds. Within the last year, there were 61 line drives hit to that area, with hang times that rounded to 2.5 seconds. Lillibridge was one of only three players who were able to turn that batted ball into an out.

Base Hit Frequency
Balls hit to spot of Lillibridge catch

Lillibridge’s value as a defensive replacement was accentuated by the Defensive Runs Saved stat, which relies heavily on this type of data (how frequently a fielder turns a batted ball into an out. The player who Lillibridge replaced in the eighth inning, Carlos Quentin, ranked last in the majors among right fielders in Runs Saved last season (an indication that he would have had a tough time turning that ball into an out).

Our second chart shows how frequently a line drive to that approximate spot has been turned into an out over the past season, based on hang time. Had Cano’s ball hung in the air for just a moment less, the Yankees, not the White Sox would have been celebrating.