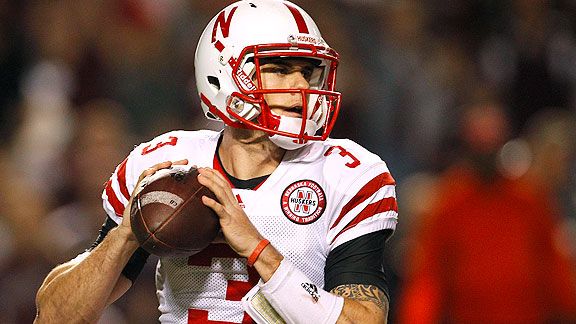 Nebraska's Taylor Martinez was named the 2010 Big 12 Offensive Newcomer of the Year.

The Big Ten Legends Division features two of the nation’s most electrifying quarterbacks in the Nebraska Cornhuskers' Taylor Martinez and the Michigan Wolverines' Denard Robinson. The two were recently named to the 2011 Maxwell Award Watch List. The award is given out each season to college football’s most outstanding player. Being named to the same list is just another similarity in two careers that seem to run parallel.

Their similarities start with the way they play football. Martinez and Robinson can beat defenses with both their feet and their arms. Last season, they were two of five players in FBS to pass for 1,500+ yards and rush for 900+ yards. When they get into the open field, both exhibit a top gear that few players can match. Among quarterbacks no one had more rushes of 20+ yards than Robinson (16) and Martinez (15) last season.

Most Rushing Yards Per Game
Without Sacks FBS QB, 2010

Their careers as starting quarterbacks began in an eerily similarly way. After sitting behind fellow freshmen Tate Forcier in 2009, Robinson was named the starter just before the kickoff of his sophomore season. He did not wait long to make national headlines. He ran for 258 yards and passed for 244 in Week 2 against the Notre Dame Fighting Irish. Then three games later, he duplicated the feat against the Indiana Hoosiers, becoming the first player in FBS history to pass for 200+ yards and rush for 200+ yards in a game twice during the regular season.

Martinez faced similar circumstances. Nebraska coach Bo Pelini publicly gave him the nod over incumbent Zac Lee 30 minutes before the season opener. Just like Robinson, Martinez burst onto the national landscape. In his first seven collegiate games, he ran for 12 touchdowns and threw for nine more. His 124.3 rushing yards per game during that stretch was ninth best in the FBS. Only Robinson and Cam Newton averaged more among quarterbacks. After nine weeks of the season, Martinez led the FBS with 14 rushes of 20+ yards. Seven of these runs went for touchdowns, also tops in the FBS.

Both players’ hot starts would temper off. Martinez suffered a lower-leg injury against the Missouri Tigers on October 30. He was forced to miss two games, and rushed for just 95 yards combined in his final five games. The Cornhuskers finished 2-3 in Martinez’s final five starts after starting the year 7-1. Michigan also struggled down the stretch, finishing 2-6 after a 5-0 start. Robinson saw his touchdown to interception ratio go from 7-1 in the first five games to 11-10 over the last eight.

Finally, Martinez (T-Magic) and Robinson (Shoelace) have two of the most recognizable nicknames in college football.

As their careers continue to run a similar course, we might have to wait until their meeting on November 19 in Ann Arbor to finally see separation and a possible leading candidate for the Big Ten Player of the Year.