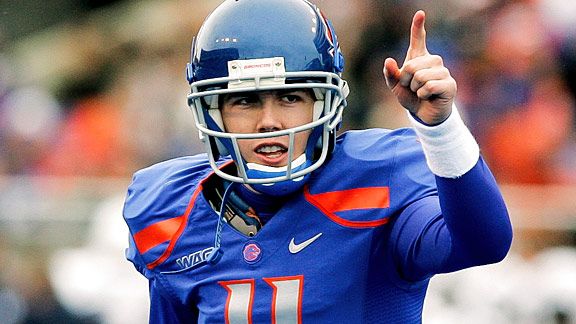 Kellen Moore must adapt to a new conference, new offensive coordinator and new set of receivers.

Kellen Moore returns to the Boise State Broncos for his senior season as a Heisman frontrunner and the nation’s active career leader in pass efficiency (166.7) and wins by a quarterback (38). Yet, not many things will look the same for Moore, who must adapt to a new conference, a new offensive coordinator and a new set of receivers.

Moore lost two of the most prolific receivers in Boise State history when Titus Young and Austin Pettis moved on to the NFL. Young and Pettis combined for 433 receptions, 5,901 yards, and 64 touchdowns at Boise State. They were Moore’s go-to receivers in the red zone, on deep passes, on third down, and when opponents brought the blitz.

The Broncos will look to Tyler Shoemaker (WR), Doug Martin (RB), Kyle Efaw (TE), Geraldo Boldewijn (WR), Mitch Burroughs (WR), Kirby Moore (WR), and others to fill the void left at wideout. This will not be an easy task, but here are the likely candidates to step up in different situations for Moore and the Broncos.

Red Zone: Austin Pettis had 22 touchdown receptions inside the 20 the past two seasons (most in FBS), and was targeted 27 more times than any other Broncos receiver in the red zone since 2009. The likely candidate to fill Pettis’ shoes is tight end Kyle Efaw. At 6-4, Efaw is a large target with good hands. Last season he caught three of five balls thrown to him in the end zone, and his three red zone touchdowns ranked second on the team behind Pettis.

Downfield: Titus Young averaged 47.7 yards per touchdown reception last year and was Moore’s greatest threat downfield. On passes thrown 30 yards or more, Moore targeted Young on 20 of 23 attempts. Geraldo Boldewijn will be asked to stretch the field in Young’s absence. His downfield speed and strength were highlighted in Boise State’s spring game, in which he had five receptions for 97 yards, including two receptions of 20 or more yards.

Moving the chains: Young and Pettis combined for more than half of Boise State’s first-down receptions last season. On third down, they were targeted on 46 of Moore’s 94 attempts. Tyler Shoemaker will likely become Moore’s go-to guy when it comes to converting first downs. Twenty-one of Shoemaker’s 30 receptions resulted in first downs, and on third down he was targeted twice as many times as any other returning player. Overall, when targeting Shoemaker on third down, Moore completed nine of 16 passes, including eight to move the chains.

For exclusive video, stories and blogs about quarterbacks from every level of competition, check out ESPN’s “Year of the Quarterback” page.