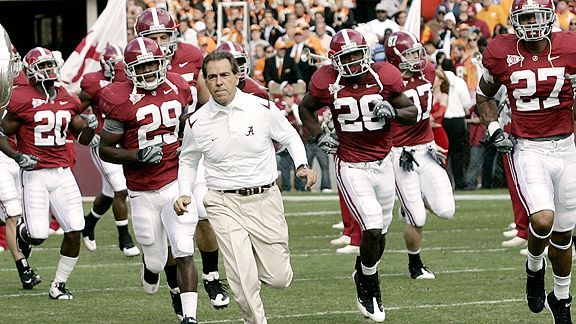 1. The Alabama Crimson Tide begin its SEC schedule this week by hosting the Arkansas Razorbacks. That could be bad news for the Razorbacks based on recent history. On the field, Alabama has won 19 straight SEC openers, with its last loss coming in 1991 to the Florida Gators (note: some of those games have since been vacated or forfeited). Only two other FBS schools have active conference-opener win streaks in double digits. The Virginia Tech Hokies have won 15 straight, while the Boise State Broncos are on an 11-game streak. But both those have come in two different conferences (Big East/ACC for Virginia Tech and Big West/WAC for Boise State). The Broncos open their first season in the Mountain West Conference on October 15 at the Colorado State Rams.

2. The LSU Tigers have won 35 straight regular season non-conference games. That's the longest such streak in FBS. Its last loss came against Virginia Tech in the 2002 season opener. It is also the third longest streak in the FBS era (since 1978). A win at the West Virginia Mountaineers would tie the Miami (FL) Hurricanes for the second longest streak.

3. Pittsburgh Panthers coach Todd Graham is attempting to do something Saturday that’s never been done before to the Notre Dame Fighting Irish. Graham led the Tulsa Golden Hurricanes to an upset win over the Irish last season in South Bend. No coach has ever beaten Notre Dame in consecutive seasons while coaching for two different schools. In fact, only three coaches have ever beaten Notre Dame while coaching two different schools (Howard Jones with Iowa & USC, Johnny Majors with Pittsburgh & Tennessee, Dennis Erickson with Miami & Oregon State). And later this season, Randy Edsall has a chance to add his name to this list when the Maryland Terrapins plays Notre Dame.

4. No. 8 Texas A&M Aggies host No. 7 Oklahoma State Cowboys on Saturday in a game that's certain to produce a rare result. Being in a division with Oklahoma and Texas, the Aggies and Cowboys have played plenty of games against top-10 teams in recent years, but they aren't accustomed to doing so while holding a top-10 ranking of their own.

What's even more unusual for these teams is to actually win a game played between top-10 teams. Since 1985, A&M (1-6) and OSU (0-4) are a combined 1-10 in matchups that fall into this category, and the one win even came in an unusual situation. When No. 10 Texas A&M beat No. 2 Kansas State Wildcats in the 1998 Big 12 title game, all the pressure was on the Wildcats, who were a 17-point favorite and playing for spot in the BCS National Championship Game.

5. Brady Hoke will attempt to beat the San Diego State Aztecs on Saturday, a program he led for the previous two seasons. If successful, he would be the third coach in Michigan Wolverines history to defeat a team that he coached the previous season. In 1901, the legendary Fielding Yost came to Ann Arbor from Stanford and promptly thumped his old team 49-0 in the first ever Rose Bowl. In 1929, Harry Kipke came to Michigan after one season as head coach at Michigan State. Michigan beat its intrastate rival 17-0 that season.