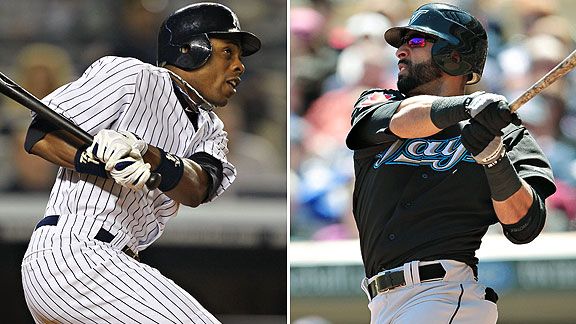 The 2011 regular season finished, arguably, in one of the most exciting fashions in baseball history. Now that the postseason has been set, let’s take a look back at which players won batting and pitching titles this season.

• For the second consecutive year, Jose Bautista of the Toronto Blue Jays claimed the home run title. His 43 on the season were two ahead of the New York Yankees' Curtis Granderson. He's the first to claim the crown in two straight years since Alex Rodriguez did it in 2002-03.

• Miguel Cabrera of the Detroit Tigers - who also led the league in doubles with 47 - was the AL (and MLB) batting champion at .344. He is the second Tigers player to win the batting title in the last 50 seasons (Magglio Ordonez in 2007).

• Although Granderson and Robinson Cano started the day one-two in the AL RBI race, it was Mark Teixeira who came up big for the Yankees on Wednesday. His five-RBI game gave him 111 on the season and propelled him into fourth place. The last time three teammates finished within the top four of their league's RBI race was the 1966 Baltimore Orioles. That year, Frank Robinson (122) won the AL RBI race, while teammates Boog Powell (109) and Brooks Robinson (100) finished second and tied for fourth, respectively.

• Jose Reyes singled in his first at-bat Wednesday and was promptly subbed out for a pinch runner. That left the New York Mets' leadoff hitter with a batting average of .337, potentially caught only by Ryan Braun who started the day at .335. Ultimately he finished the game 0-for-4 for a season average of .332, giving Reyes - and the Mets franchise - their first-ever NL batting champion. Reyes won the NL batting title in only 126 games played this season. That's the fewest amount of games played for a batting champion since Manny Ramirez hit .349 in 120 games played in 2002.

• Prince Fielder and Matt Kemp were tied for the NL home run lead entering Wednesday, but with just three innings left in the season, Kemp launched his 39th of the season out of Chase Field and claimed the title outright. Fielder finished with 38 and was followed by Albert Pujols' 37. The last season the National League leader did not finish with at least 40 HR was in 1992 when Fred McGriff had 35. Kemp also finished as the National League RBI leader with 126, six above Fielder.

• Starlin Castro led the National League in hits this year with 207. According to the Elias Sports Bureau, the 21-year-old Castro is the youngest player ever to lead the NL in that category, breaking the mark set in 1918 by another Chicago Cubs player, Charlie Hollocher, who was 22 years, 83 days old on the final day of that war-shortened season.

Other Point of Interest