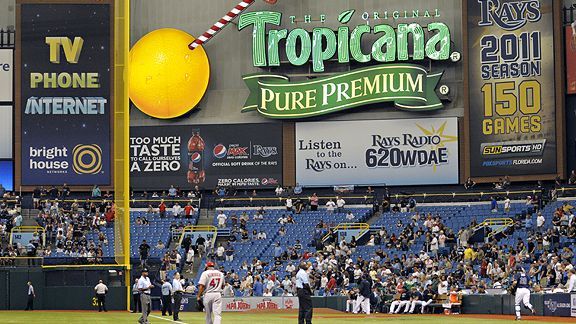 Despite making the playoffs 3 of the last 4 years and advancing to the World Series in 2008, Tampa Bay's attendance has been at or near the bottom in the majors.

Shortly after the team’s loss to the Texas Rangers in the American League Division Series -- which saw only 28,299 fans show -- Tampa Bay Rays owner Stuart Sternberg launched into the troubling financial situation of his franchise:

"The rubber has got to hit the road at some point. We're four years into winning. We're getting to the point where we don't control our own destiny. This is untenable as a model…When I came in here in '05 and '06, I saw the stars, and I was confident that we could put a winning product on the field -- and I was told by you guys and others that all we needed was a winning team. Well, we won. We won. We won. And we won. And it didn't do it."

Sternberg acquired control of the franchise in 2005. Since that point, the Rays have arguably developed into the model organization in the sport, allowing them to compete year after year over the last four years despite a limited payroll.

The team’s success has not translated to sufficient attendance. One would have expected at least a noticeable uptick in attendance with the team routinely winning 30 more games per season than it used to, but that has simply not been the case.

It appears the preseason warnings of a down season and the huge departures via free agency may have kept the fans away.

The Rays have two AL East titles, a World Series appearance and three postseason appearances in four seasons, but have averaged exactly 1,748 more fans per game than they did in 2007, when they lost 96 games.

Unfortunately, the lack of attendance has a direct effect on the Rays’ ability to spend money. After attendance issues last year both in the regular season and postseason, the Rays slashed payroll by around $30 million.

While at first glance it might appear as though the Rays’ 2011 spending situation is actually a non-trivial improvement over the spending from 2005-07, it is actually just a case of context. The team ranked 29th in 2011 and ranked 30th, 29th, 30th, 29th from 2005-08. Payrolls across baseball have risen since 2005 as a whole, so in reality the Rays are still spending at the same fractional amount of competitors. For example, in 2005 the Rays payroll accounted for 24 percent of the Boston Red Sox payroll. In 2011, the Rays payroll increased 38 percent over its 2005 payroll -- was barely more than 25 percent of the Red Sox 2011 payroll, essentially no difference from 2005.

Over the years the team has lost Carl Crawford, Matt Garza, Carlos Pena, Joaquin Benoit, Scott Kazmir, Rafael Soriano, either due to unmatchable free agent offers or trades made necessary by salary obligations. It’s entirely possible that the team could once again leak talent this offseason, with James Shields getting more expensive and B.J. Upton due a raise from the nearly $5 million he made in 2011 in the arbitration process.

An organization can only churn out Matt Moores and Jeremy Hellicksons and Desmond Jennings for so long in an effort to paper over holes created from departures. At some point, perhaps the Rays can find themselves a better situation, allowing their on-field success to overshadow their off-field issues.