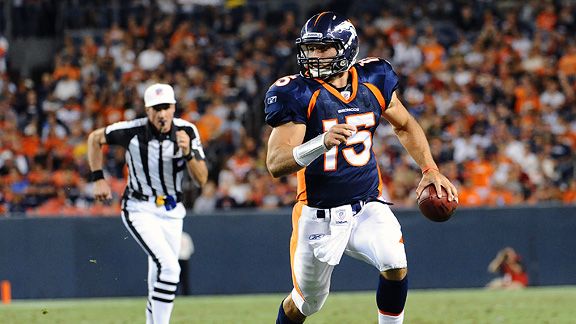 Measuring a QB’s rushing contributions -- such as Tebow’s -- is an advantage Total QBR has over other rating systems that look only at a quarterback’s passing statistics.

Tim Tebow was named the starter for the Denver Broncos on Tuesday. This comes with the Broncos standing at 1-4 and after Tebow staged an unsuccessful comeback Sunday, having entered the game in the third quarter with the Broncos down 13.

Quarterbacks in the NFL often get graded on their win-loss records, which appears to be why the 1-4 Kyle Orton is out. But win-loss record is reflected quite strongly by ESPN’s QBR statistic as well, with it correlating to winning at more than 85 percent. So evaluating Tebow on QBR should be some reflection of his ability to improve the Broncos' win-loss record.

Tebow posted an 83.2 QBR in his partial comeback Sunday. This -- along with Week 15 last season -- is as good a game as he has had, but a very small sample. It’s like a pinch hitter hitting a home run in his only at-bat. That 83.2 is better than Aaron Rodgers’ 82.1 against the Atlanta Falcons because Tebow was efficient. It doesn’t mean, though, that he is a star. The San Diego Chargers weren’t ready for him, and they were winning by two touchdowns when he entered the game. Tebow was good for a quarter and a half.

Tebow started the last three games in 2010 for the Broncos, too. You know what his QBR was in his first start then? An 83.3. Almost exactly the same as Sunday’s performance. Both performances were more about Tebow’s running than his passing. Both performances had him completing about half his passes, losing the game, but getting a touchdown by land and a touchdown by air and setting off a revolution with calls of “Tebow is coming! Tebow is coming!”

Whoa! Tebow is becoming a hero before the battle is even fought. After his opening game in 2010, he did win his second one, albeit with a lower QBR of 58.5. In his third game, his QBR dropped to 31 and the Broncos lost. His interception rate increased from zero to one to two across the three games. His running continued to make him look like a hero because it is his individual effort to run, but passing wins in the NFL and that was on the decline. Total tally: one win, two losses, QBR of 58.7 with a downward trend.

Tim Tebow is not Aaron Rodgers. Even if he now has five and a half quarters of QBR around 80, he has a lot more quarters around 50. That’s better than Orton, but not by a lot. The Tebow Revolution might have begun, but it’s a long way from succeeding.

For exclusive video, stories and blogs about quarterbacks from every level of competition, check out ESPN's Year of the Quarterback page.