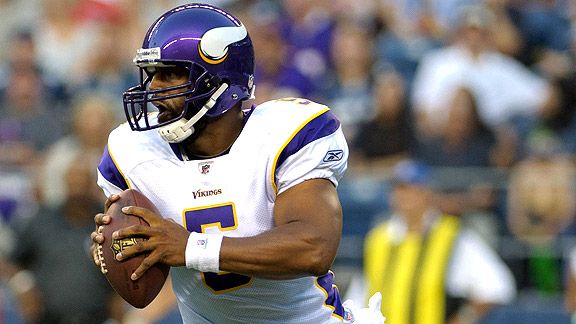 Donovan McNabb (who lost his starting job this week) has the best QBR (67.5) among quarterbacks (minimum 10 action plays) in pressure situations this season.

Nothing disrupts even the best quarterbacks like defensive pressure. Teams that can keep their quarterbacks protected obviously are more likely to benefit from that quarterback’s performance.

However, when the pocket breaks down, who are the quarterbacks who have been able to keep their composure and make a play? And which offenses have been the best (or worst) at protecting their signal-callers by limiting sacks, scrambles and duress/hits on them?

• The top QBR (minimum 10 action plays) for a player this season in pressure situations is 67.5 for Donovan McNabb. The worst is 0.1 for Mark Sanchez. This difference in QBR is worth about 34 points and both have felt the heat over 50 times this season, implying that McNabb would have saved the Jets about 34 points thus far.

Vick• The QB who has been under the most pressure is Michael Vick, with 102 plays. He has performed admirably in these situations, with a QBR of 49.5. As a league, the average QBR in these situations is 7.0 and it happens about 11 times per team per game.

• Matt Hasselbeck and Tom Brady have been pressured on the fewest percentage of plays. Brady has handled it better with a QBR of 8.3, whereas Hasselbeck has just a QBR of 1.6 in these situations.

• Ben Roethlisberger is known for keeping plays alive and, when he does keep them alive to avoid a sack, his QBR is 66.6, fifth in the league among quarterbacks with 30 action plays. Nonetheless, he has taken 18 sacks (one behind Jay Cutler), and his QBR under all pressure including sacks is just 11.1, better than average but not going to win a lot of games.

For exclusive video, stories and blogs about quarterbacks from every level of competition, check out ESPN's "Year of the Quarterback" page.