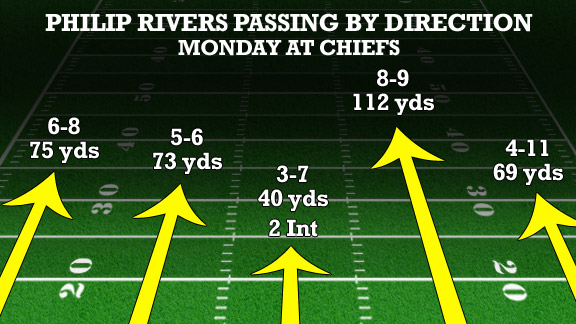 Philip Rivers had his share of issues throwing to certain spots on Monday Night.

The Kansas City Chiefs finally gave up some points, but when the defense needed to come through, it got a big stop against a turnover-prone quarterback that turned a likely loss into an unlikely victory, 23-20 over the San Diego Chargers.

With the win, the Chiefs became the fifth team since 1980, and the first since the 2000 Pittsburgh Steelers to win four straight games after an 0-3 start.

The Elias Sports Bureau noted that they’re the first team in NFL history to lose each of its first three games of a season and then earn at least a share of first place seven or fewer games into that season. They also snapped a streak of nine straight losses by home teams in overtime games.

The Chiefs finally yielded points after going 112 minutes and 38 seconds without doing so. Elias reports that it was the team’s longest span since a 122-minute, 48-second streak during the 1990 season and that their span without allowing a touchdown (nearly 144 minutes) was the NFL’s longest since the 2008 Bengals went 152 minutes, 24 seconds without yielding one.

The eight turnovers (four for each team) matched the single-game high for turnovers this season, though it was five shy of the mark for the most in a Monday Night Football game (13, set by a Cardinals-Redskins game in 1976).

Chargers quarterback Philip Rivers threw two more interceptions to give him a season-high 11, just two shy of his total from 2010. The Chiefs took away the middle of the field from Rivers who was 3-for-7 on passes between the hashmarks, with both interceptions on those throws.

It’s only the third time this season that a quarterback has thrown at least two interceptions on fewer than eight attempts thrown across the middle of the field.

Both of the other quarterbacks to do that this season- Tom Brady against the Bills in Week 3 and Rex Grossman against the Eagles in Week 6- lost the game as well.

The Chargers also recovered a Rivers fumble late in regulation to force overtime. Elias shared that it was the first time a player lost a fumble on a red-zone play in a tie game with less than two minutes to go since Sammy Winder of the Denver Broncos on October 1, 1989 against the Cleveland Browns. He fumbled on a play that started at the Browns’ 8-yard line with 1:42 left. The Browns would score to win that day, 16-13.

This marked the second straight season that the Chiefs won on an overtime field goal by Ryan Succop on Halloween. They beat the Bills on a 35-yard kick by Succop last season.

Chargers kicker Nick Novak kept San Diego in the game by making four field goals. His one miss, from 51 yards, made a difference in the game and on a couple of fronts.

It was the only miss by a kicker on a field goal try of at least 50 yards this week (they were 4-for-5).

It also knocked the Chargers off the list of teams that have been perfect on their field goal attempts this season, a list that now consists of the Atlanta Falcons, Jacksonville Jaguars, Green Bay Packers, and New York Jets.