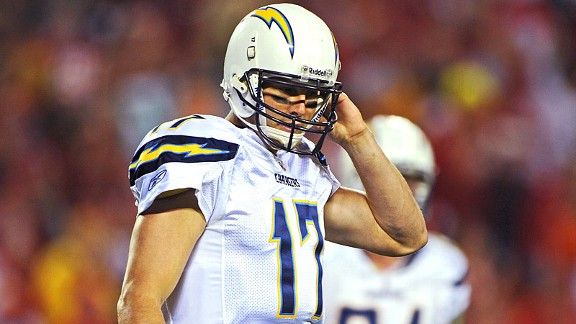 Philip Rivers and the Chargers look to bounce back from their overtime loss to the Chiefs on Halloween. They face the defending champion 7-0 Packers on Sunday afternoon.

The San Diego Chargers were anything but super in their 23-20 overtime loss to the Kansas City Chiefs on Monday Night football last week.

It was a sloppy effort by the Chargers, who were penalized 12 times for 105 yards. Their disappointing performance was punctuated by a Philip Rivers fumbled snap in the red zone with less than a minute left.

San Diego fell to 4-3 but remains in a three-way tie for the AFC West lead. This slow start is nothing new for the Chargers, who have been known to start slowly before making a late push for a postseason spot.

Part of the reason for the Chargers’ mediocre record is that Rivers has not performed up to the standard he's set for himself over the past several years.

A closer look at previous seasons reveals that Rivers has made it a habit of being an average QB in September and October, before turning it on and playing at an elite level during the second half of the season.

As the calendar turns to November, Rivers and the Chargers will try to “flip the switch” again. It won’t be easy this coming weekend with the defending champion 7-0 Green Bay Packers coming to town.

The Packers enter on a franchise-record 13-game win streak, including playoffs. They are 7-0 for the first time since 1962, when they started 10-0 and went on to win the NFL title.

Green Bay also has history on their side in this game. The Packers have never lost on the road to San Diego and are 8-1 all-time against the Chargers. They've outscored the Chargers by a combined 35 points the last two times they visited San Diego.

This week appears to be an ideal opportunity for Rivers to reverse his passing woes, as the Packers are 31st in the NFL, allowing 288.9 passing yards per game. Digging deeper into the numbers reveals that Green Bay may have the perfect pass defense to force Rivers into another bad performance.

No team uses their sub-small defenses, a formation that includes five defensive backs, more often than the Packers (73 percent of plays). Rivers has thrown nine of his 11 interceptions against these defensive formations. Those nine interceptions are tied with Matt Cassel for the most in the NFL.