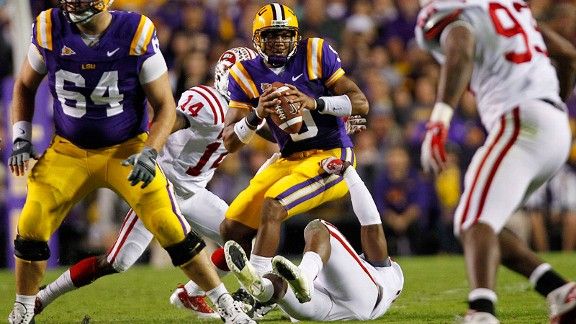 After 11 weeks of football, there are three unbeaten teams remaining in the FBS. What makes these teams go? Do they have a weakness that will cost them a chance at an undefeated season? And what is each team’s toughest game remaining on the schedule?

ESPN’s Statistics & Information Group answered these three questions for each of the three teams in a series that started Tuesday with the Houston Cougars, and continued Wednesday with the Oklahoma State Cowboys. Today we look at the top-ranked team in the nation, the LSU Tigers.

What they do well: One of the hardest things to do in college football this season is score on the Tigers defense. LSU is allowing 10.7 points per game this season, second fewest in FBS, and have held eight of ten opponents to 11 points or fewer.

Why is it so difficult to score against LSU?

• The Tigers do not give up big plays, forcing teams to sustain long drives. LSU has allowed the second-fewest plays of 20-plus yards in FBS, and is the only team to not allow a run of 30 yards or longer. It takes an average of 9.9 plays to score against LSU this season, highest in FBS.

• LSU has shut down opposing quarterbacks. The Tigers are limiting opponents to the second-lowest passing efficiency rating in FBS (94.8).

• When it comes to making plays on the ball, no one is better. Opponents have completed just 5-of-38 passes that were thrown at least 20 yards against LSU this season, with more interceptions (7) than completions (5).

With all the challenges LSU’s defense presents, the end result is that the Tigers have allowed the second-lowest touchdown percentage in the nation with only 11 touchdowns allowed in 125 possessions (8.8 percent).

Last season, Lee and Jefferson combined for four fourth-quarter comebacks, and LSU as a team completed 72.7 percent of its passes when trailing in the fourth quarter. Only the Auburn Tigers completed a higher percentage in this situation last year.

Biggest hurdle remaining: LSU faces the Arkansas Razorbacks in Week 13 on the day after Thanksgiving. This is the same Arkansas team that has won three of its last four games against LSU, including a 31-23 victory last season.

The Razorbacks once again have one of the nation’s best offenses, leading the SEC in scoring at 38.8 points per game. The key to the game for LSU will be limiting big plays. Arkansas has 43 completions of 20 yards or longer this season, 12 more than any other SEC team.

It was big plays that cost the Tigers in last season’s game. Arkansas scored touchdowns on passes of 85, 80 and 39 yards. It was the only game in the last eight seasons that LSU allowed three or more touchdown passes that were all at least 35 yards.