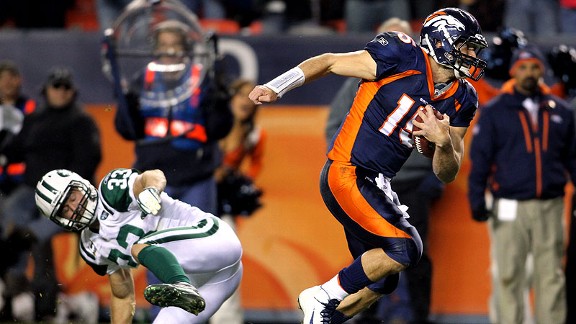 Tim Tebow has steamrolled opponents in his four wins this season

Who’s the best fourth-quarter quarterback in the NFL this season?

Those three rank just ahead of two quarterbacks who would be expected to be on this list, since they rank 1-2 in Total QBR-- Drew Brees (83.3) and Aaron Rodgers (82.1).

Tebow sits second, on the strength of the Broncos fourth-quarter comeback wins over the Miami Dolphins and New York Jets.

Some notes on topics related to Tebow’s comeback magic:

When comparing the first eight starts in the careers of Tebow and John Elway, Tebow compares quite favorably, as you can see in the chart on the right.

The win over the Jets was the already third fourth-quarter comeback for Tebow in his first eight starts.

Elway didn’t have his first fourth-quarter comeback effort until his ninth start.

Tebow the passer vs Tebow the runner

Tebow’s QBR on his pass attempts this season is a meager 12.2. How bad is that? It ranks 36th among the 37 quarterbacks who met the qualifier of 100 action plays, ahead of only Indianapolis Colts quarterback Kerry Collins (10.4).

Tebow’s QBR on rushes and scrambles is 77.7, which trails only now-injured Kansas City Chiefs quarterback Matt Cassel (83.9) and Josh Freeman (81.1)

How good should the Broncos be?

Tebow ranks 29th among quarterbacks in Total QBR at 35.1 (one spot behind Mark Sanchez), 30.3 in the five games he’s started. Based on using that number as an estimated winning percentage (one of the purposes of the stat), the Broncos should have won no more than two of the five games. They’ve won four of them.

In each of the four wins, Tebow has completed fewer than half of his passes. According to the Elias Sports Bureau, he's the second starting quarterback to win four games in which he had a completion percentage below 20 percent. The other was Aaron Brooks in 2003. The last quarterback with more such wins was Phil Simms with five for the 1986 Giants.

There are other factors involved in the Broncos recent success:

• The Broncos defense has allowed just five offensive touchdowns in the four wins with Tebow starting (they allowed 14 in the five games scored by Kyle Orton).

The Broncos pass defense has been above-average. They have allowed a Total QBR of 41.2, in these five contests (12th-best in the NFL), and had a key interception return for a touchdown in the win over the Jets.

• Key special teams plays accounted for the go-ahead scores in two of the Broncos wins: Matt Prater’s 52-yd game-winning field goal in overtime against the Dolphins and Eddie Royal’s 85-yard punt return in the fourth quarter against the Oakland Raiders.