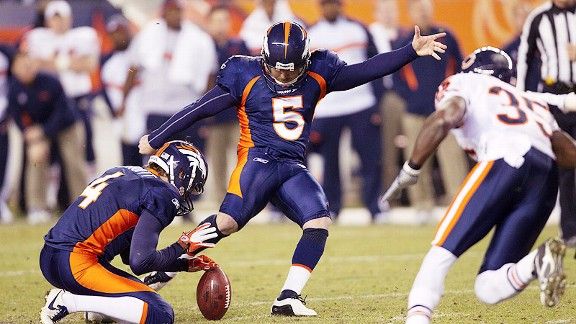 Within all the amazement from Sunday’s overtime win for the Denver Broncos over the Chicago Bears, let’s not forget that Broncos kicker Matt Prater played a significant role in further enhancing the legend that has become Tim Tebow.

The two combined in an effective manner. Tebow was a short-range star in the fourth quarter. Prater was most effective on plays of great length.

The Elias Sports Bureau noted that the Broncos were the second team in NFL history to win four straight games in which they trailed in the fourth quarter (joining the 2009 Colts).

Prater is the second kicker in NFL history with a pair of overtime field goals that were at least 50 yards long (the other was a 52-yarder to beat the Dolphins in Week 7). The other kicker to do that was Greg Davis, who had one in 1989 and another in 1994.

Also, according to Elias, this was the first game in NFL history in which each kicker made a field goal attempt of at least 57 yards. Bears kicker Robbie Gould made a team-record 57-yarder earlier in the fourth quarter.

His 75 percent accuracy rate on those kicks is the second best among current kickers who have tried at least 10 field goals of that length in the last five seasons, trailing only Rob Bironas of the Tennessee Titans, who is 15-for-19 (79 percent).

Incidentally, Gould is among those right behind them at 11-for-15 (73 percent).

The distance kicking success is part of a season-long trend. Prater’s game-winning field goal was the 75th field goal of at least 50 yards this season, a league record for most in a season, shattering the mark of 66 set in 2008.

As for Tebow, it was another improbable performance by a quarterback who started 3-for-16 through the first three quarters, but finished 18-for-his-last 24 for 191 yards and a touchdown.

Broncos receivers dropped four passes in the first three quarters of the game, but dropped only one of his last 21 pass attempts.

Tebow changed his approach in the fourth quarter. His average pass attempt through the first three quarters went 17 yards in the air. But most of his fourth quarter throws were shorter than that.

Tebow was 15-for-17 for 133 yards in the fourth quarter and overtime on throws that traveled fewer than 15 yards in the air.

This was the Broncos third overtime win of the season, tied for the second-most such victories in NFL history (the 2003 Carolina Panthers had four).

All three victories were started by Tebow … and finished by Prater.