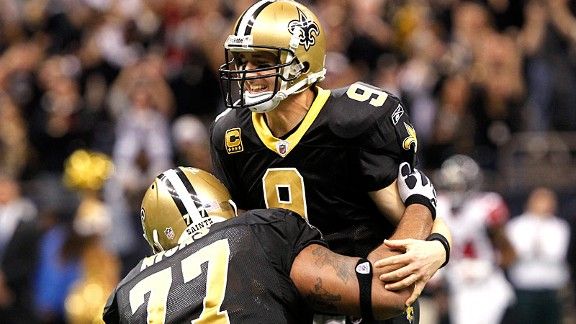 Drew Brees celebrates after breaking Dan Marino's all-time single-season passing yardage record in the fourth quarter of the Saints 45-16 win over the FalconsWith the NFC South title on the line in New Orleans, all eyes were on Drew Brees and his pursuit of Dan Marino’s 27-year old record for most passing yards in a season.

Brees broke the record with a 9-yard touchdown pass to Darren Sproles with 2:51 left in the fourth quarter. Three minutes later, the New Orleans Saints had clinched the NFC South title and the party was on in the French Quarter.

With one game left to play in the 2011 season, Drew Brees has thrown for 5,087 yards. That’s three yards ahead of Marino and 190 ahead of Tom Brady, who also has a chance to pass the old record this season.

Brees finished with 307 pass yards and four touchdowns through the air. He extended his NFL record for 300-yard pass games in a season with his 12th. It was his sixth straight 300-yard passing game, which pulled him even with Rich Gannon, Kurt Warner and Steve Young for the most in NFL history.

With four touchdown passes, Brees increased his season total to 41. It’s the seventh time in NFL history that a quarterback has thrown for at least 40 touchdowns in a season. With at least one TD pass in 42 straight games, Brees is five behind Johnny Unitas for the all-time NFL record.

It wasn’t just a record breaking day for Brees.

Sproles ran for 67 yards to become the 2nd player in NFL history with 500 rush yards, 500 receiving yards and 1,000 combined return yards in the same season. The only other player to reach those marks in single season was Dick Christy for the 1962 New York Jets.

Both teams are heading to the playoffs this season, but each has something to play for in Week 17. The Saints can claim a first-round bye with a win and a loss by the San Francisco 49ers, while the Falcons can pass the Detroit Lions for the fifth seed with a win and Detroit loss.