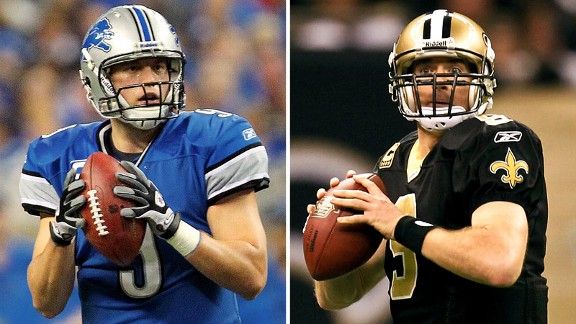 A pair of 5,000-yard quarterbacks will face off Saturday night as Matthew Stafford
and the Detroit Lions take on Drew Brees and the New Orleans Saints

The Saints are just two seasons removed from hoisting the Lombardi Trophy. That from a franchise that won just two playoff games in its first 42 years in the NFL.

Compared to the slump the Saints were once on, the Lions current drought seems brief. But the Lions had missed the playoffs for 11 straight seasons before this year, which was tied with the Buffalo Bills for the longest active streak.

Now, the Lions will try to snap a six-game postseason streak that dates back to the 1991 season. If Detroit drops Saturday night’s game, it’ll tie the Chiefs for the longest postseason losing streak in NFL history.

What these teams do have in common, however, is a propensity for throwing the ball. Both teams' quarterbacks, Drew Brees and Matthew Stafford, went over 5,000 yards this season.

The difference maker in this game could be on the defensive side of the ball. Especially how these teams rush the opposing passer.

When the Saints have it

Don’t think that dropping additional defenders into coverage will help the issue. Brees shredded opposing defenses for a 74.0 completion percentage and an 89.9 Total QBR when facing four or fewer rushers, both best in the NFL.

The Lions used four or fewer pass rushers on 78.9 percent of their opponents’ dropbacks this season, the fourth-highest rate in the NFL. In Week 13, Brees went 22-28 for 297 yards and 3 touchdowns against the Lions when Detroit sent four or fewer rushers.

When the Lions have it

Unlike the Lions, no team sent extra rushers after the quarterback more often this season than the Saints. New Orleans sent five or more pass rushers on 51.1 percent of dropbacks.

Stafford struggled this season when facing the extra pressure, with a 44.4 Total QBR and six interceptions against seven touchdowns.

No qualifying quarterback faced extra defensive pressure more often than Stafford this season, as he faced five or more pass rushers on 24.6 percent of his dropbacks. However, only four quarterbacks threw more interceptions in such situations than Stafford’s six.

Stafford finished the seasons with 16 interceptions, tied for the seventh-most in the NFL. However, that total could’ve been much higher. Opponents dropped six potential interceptions against Stafford this season, the most against any passer in the NFL.

Stafford is coming off a huge game, so momentum could be on his side. In Week 17 against the Packers, Stafford threw for 520 yards, fifth-most in NFL history, and the most since Boomer Esiason threw for 522 yards in 1996.