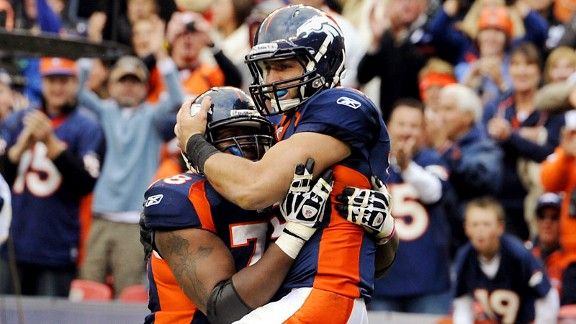 A Tim Tebow celebration of this nature in Indianapolis in a few weeks? History shows it is possible.

Getting to the Super Bowl would not be an unprecedented historical accomplishment for either Denver Broncos quarterback Tim Tebow or Houston Texans quarterback T.J. Yates.

Though Tebow didn't start until Week 6 after the Broncos began the season 1-4 and Yates didn't make his first start until the Texans 12th game of the season and each enters the playoffs on a three-game losing streak, NFL history has multiple examples of quarterbacks who took over as their team’s starting quarterback after not starting in the early part of the season.

Here’s a look at five previous examples of quarterbacks, each of whom sat on the bench for their teams first five games, but who then guided their team all the way to football’s biggest game.

Bradshaw attempted a pass in just one of Pittsburgh's first six games of the 1974 season, playing behind Joe Gilliam. Bradshaw took over as the starter in the team's seventh game and led Pittsburgh to the title in Super Bowl IX, the first of four Super Bowls the Steelers would win in a six-year span.

VFerragamo made his first start of the season in the Rams 12th game after Pat Haden was injured and Jeff Rutledge was benched. Ferragamo led Los Angeles to wins in four of its final five regular season games and the NFC West crown before falling to Pittsburgh in Super Bowl XIV.

Plunkett took over after starter Dan Pastorini broke his leg during Week 5. Though Oakland was just 2-3 when Plunkett made his debut, the former Heisman Trophy winner led the Raiders to nine wins in their final 11 regular season games and, ultimately, a victory in Super Bowl XV, a game in which Plunkett was named MVP.

Hostetler replaced Phil Simms after the Giants star quarterback broke his foot in Week 15. The career backup -- who had started just two games in four prior NFL seasons -- led the Giants to wins in each of their final two regular season games as well as three straight playoff wins, including a 20-19 victory over the Buffalo Bills in Super Bowl XXV.

Trent Dilfer stepped in for Tony Banks after he and the Ravens offense were held without a touchdown for four straight weeks. Though Baltimore would lose Dilfer's first start, the Ravens won their final seven regular season contests. Baltimore then won each of its four playoff games by double-digits including a 34-7 drubbing of the New York Giants in Super Bowl XXXV.