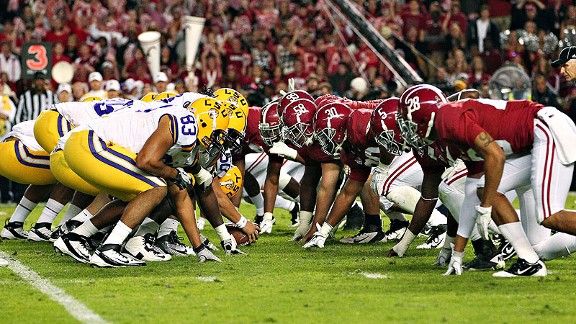 Alabama looks for revenge against LSU in the BCS National Championship game on Monday night.

Just one month after the matchup became official and more than two months since the first meeting this season between the Alabama Crimson Tide and LSU Tigers, the Rematch of the Century is almost here.

The No. 1 and No. 2 teams in the country face off for the second time this season on Monday night (8:30 ET on ESPN) with the BCS National Championship on the line.

Alabama could be the first team since the Minnesota Gophers in 1936 to finish as national champion without winning its conference title (aside from independents).

Already this season, LSU has beaten No. 3 Oregon, No. 2 Alabama and No. 3 Arkansas. With a win in this game, the Tigers will become only the second team to defeat four top-3 teams along the way, joining the 1943 Notre Dame Fighting Irish.

When the Crimson Tide have the ball, the focus will be on Heisman finalist Trent Richardson. Richardson was able to break down the Tigers’ second-ranked defense in the first meeting, totaling 169 yards from scrimmage, which is by far the most by an opposing running back against LSU this season.

However, in that same game, the LSU defense did have success penetrating the Alabama offensive line. Richardson was hit in the backfield on five of his 23 runs (22 percent), the highest percentage of rushes in Richardson’s career in which he was hit behind the line of scrimmage by an SEC opponent.

Alabama owns arguably the best defense in FBS this season, leading the nation in scoring, total, rushing and passing defense. Though LSU was not able to reach the end zone against the Tide in November, the Tigers did have success on the ground with 148 rushing yards, the second-most allowed by Alabama this season.

When Jordan Jefferson entered that game, LSU utilized his athleticism by running seven option plays that kept Alabama off balance. The Tigers ran for 54 yards on these plays, including two for 14 and 15 yards by Michael Ford. Ford is the only player with two rushes of 14-plus yards against Alabama this season.

Kickers in the spotlight

In the first meeting, the kicking game proved to be the deciding factor as both teams were kept out of the end zone. Alabama missed four of six field goals; LSU made all three of its attempts in the victory.

LSU has had the better kicking game all season. LSU made 88.9 percent of its field goals this season (3rd in FBS); Alabama made 62.1 percent (93rd in FBS). The Tigers have the clear edge in long-distance kicks and pressure situations.

Alabama missed four of its five field goal attempts from at least 38 yards against LSU and was 2-for-11 on such kicks during the season. LSU was 3-for-4 from that range this season, but its last attempt was September 15 vs Mississippi State.

Stat of the game

This is just the second “national championship” game between teams that had already met in the regular season. In 1996, Florida State beat Florida in November, only to end up having a rematch with the Gators in the Sugar Bowl. Florida routed the Seminoles 52-20 in the second game.