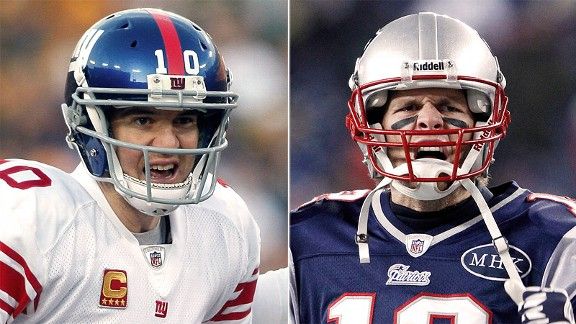 There are plenty of on-field storylines this weekend in the NFL, but Sunday's games have enormous implications for the quarterback history books as well.

Patriots QB Tom Brady enters the weekend with a 15-5 career postseason record. His .750 winning percentage currently ranks as the third-best all-time (minimum 10 starts) behind Bart Starr (.900) and Jim Plunkett (.800). Another win would tie him with Joe Montana (16) for the most career postseason wins by a quarterback.

Of course, a win on Sunday would also mean another trip to the Super Bowl. It would be Brady’s fifth, and assuming Brady gets the start on Feb. 5, he would tie John Elway for the most Super Bowl starts in NFL history.

A win would also be Flacco’s sixth in the playoffs in just four seasons in the NFL.

Both Starting QBs No. 1 Picks in NFL Draft
Playoff Games Since 1966

According to the Elias Sports Bureau, this will be only the fourth playoff game in the Super Bowl era between starting QBs who were both No. 1 overall picks in the NFL Draft.

It's the first meeting between former No. 1 picks at quarterback since the 1999 Wild Card Playoffs, when the Vikings' Jeff George (selected No. 1 overall in the 1990 NFL Draft) faced off against the Cowboys' Troy Aikman (No. 1 in 1989).

With a win, Smith would have 15 wins this season (including both regular-season and playoff games). Entering this season, he had just 19 wins in 50 career starts.