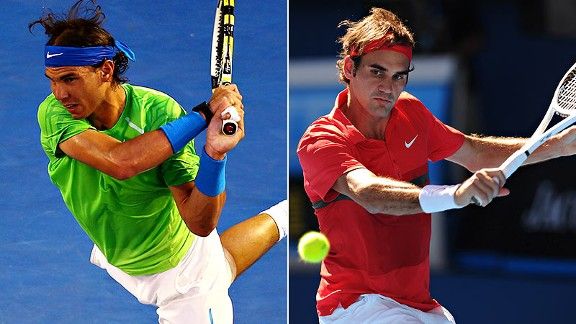 Rafael Nadal and Roger Federer will meet for an Open Era record-tying 10th time in a Grand Slam. Nadal has won the last four meetings, including a five-set win in their only previous Australian Open meeting.One of the best rivalries in tennis history will be renewed when Rafael Nadal and Roger Federer meet in the semifinals of the Australian Open on Thursday at 3:30 am ET on ESPN2.

Nadal has won seven of the nine Grand Slam meetings, including the last four. Three of their matches have gone the full five sets - including their only meeting at Melbourne Park in the 2009 final.

The strange thing about this match is that it is happening in the semifinals. Their previous eight Grand Slam meetings at have all been in finals. Their only other Grand Slam semifinal meeting came at the 2005 French Open, a match won by Nadal in four sets.

According to the International Tennis Federation, this will be the fourth meeting at a Grand Slam between men who have achieved a career Grand Slam. Roy Emerson and Rod Laver did it twice. (Nadal and Federer also met in the French Open final last year.)

Federer takes a 24-match win streak into the match, and is the only player who has yet to drop a set in the Australian Open.

Based on their quarterfinal matches, Federer should be the fresher of the two players. The Swiss needed just one hour, 59 minutes to beat Juan Martin del Potro. Nadal needed more than four hours to beat Tomas Berdych.

If Federer is able to beat Nadal, it will be the 233rd Grand Slam match win of his career. That will tie Jimmy Connors for the most in men’s Open Era.