On Saturday, Michigan State presented the model for stopping Jared Sullinger - make him catch the ball outside the paint and put the ball on the floor. That's what Minnesota will look to do when it hosts Ohio State (9 ET on ESPN).

Sullinger had a nightmarish game Saturday, turning the ball over 10 times while shooting 5-for-15 from the floor. He was the first Big Ten player with double-digit turnovers since former Buckeye Evan Turner two seasons ago.

Despite playing the full 40 minutes, Sullinger did not catch the ball in the post inside the paint a single time against the Spartans.

Michigan State’s game plan exposed a weakness Sullinger has had all season long. He has 24 turnovers this season when catching the ball outside of the paint and 23 turnovers after putting the ball on the floor.

Conversely, he has just four turnovers when posting up in the paint and hasn't had a single turnover on those plays in his last six games. 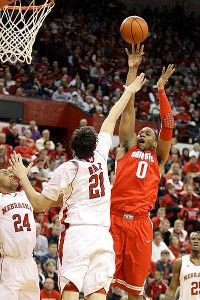 Jared Sullinger is one of the best post-up players in the nation.

Limiting Sullinger's turnovers has been a key for the Buckeyes. They're 13-0 this season when he has one or fewer turnovers.

Sullinger is one of the best post-up players in college basketball. Among players with at least 100 post-up plays this season, he ranks fifth with 1.08 points per play. He draws a shooting foul on 19 percent of his post-ups, which ranks fourth in the country.

In his two games prior to the Michigan State loss, Sullinger caught the ball four times in the post inside the paint and got fouled on all four plays.

Without good position, Sullinger isn't as effective. The further he is from the basket, the more he needs to dribble to create offense, which in turn opens up the possibility of turnovers.

Ohio State hasn’t lost back-to-back games since starting Big Ten play at 0-2 during the 2009-10 season. To avoid breaking that streak, the Buckeyes need to get the ball to Sullinger where he is more likely to succeed.