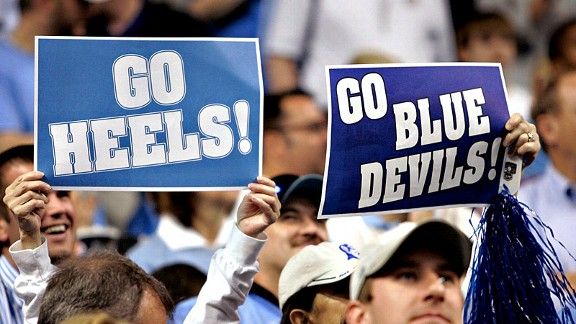 North Carolina and Duke play for the second time this season on Saturday, with the Tar Heels looking to avenge a one-point loss on Feb. 8.The North Carolina Tar Heels visit the Duke Blue Devils on Saturday (7 p.m. ET, ESPN) with the regular-season ACC title and a possible top seed in the NCAA Tournament on the line.

No rivalry in the country is tighter than the one between North Carolina and Duke. In the past 82 meetings between the schools, the Tar Heels have outscored the Blue Devils by a single point -- 6,355 to 6,354.

Saturday night will be the sixth time that the rivals have played each other in the regular-season finale while tied for the ACC lead with the title on the line. North Carolina has won three of the previous five contests, including both games under Roy Williams.

The schools have combined to win 47 regular-season ACC titles, with the Tar Heels claiming 28 and the Blue Devils 19. The rest of the schools in the conference have combined for just 23.

Roy Williams is 8-10 against Duke since arriving in Chapel Hill. Those 10 losses are his most against any opponent in his nine seasons with the Tar Heels. The only other ACC team that North Carolina has a losing record against under Williams is Georgia Tech (7-8).

When North Carolina has the ball

Duke has an uncharacteristically poor defense this season. The Blue Devils are allowing 99 points per 100 possessions, which puts the team near the middle of the pack among Division I schools. The Blue Devils are on track to finish outside the top 50 in defensive efficiency for the first time since rankings became available in 2000.

Since Duke’s last-second win at Chapel Hill, the defense has shown improvement. In their first 24 games, the Blue Devils allowed opponents to score 70 points per game while shooting 44 percent from the field. Over the last six games, those numbers have dropped to 63 and 40, respectively.

When Duke has the ball

What hasn’t been a problem for Duke this season is its offense. The Blue Devils average 114 points per 100 possessions, 13th in the nation and tops in the ACC.

In the first meeting this season, North Carolina dictated the pace for much of the game, forcing the Blue Devils into quick shots. Nearly a third of Duke’s field goal attempts came in the first 10 seconds of the shot clock.

However, the Blue Devils were able to execute more efficiently late in the shot clock. Duke made five of its seven attempts from the floor with 10 or less seconds remaining on the shot clock, including the game-winning 3-pointer by Austin Rivers.