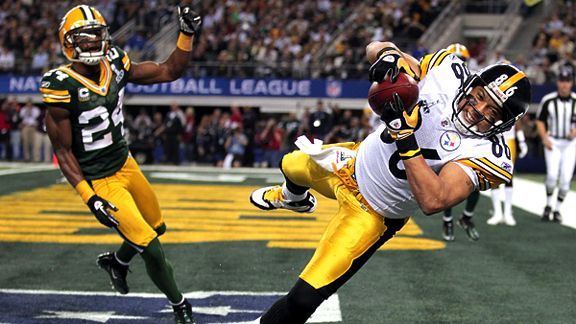 A third-round pick in 1998, Hines Ward played in three Super Bowls and had 1,000 career receptions.

Hall of Fame voting results in recent years seem to show that outstanding individual production (Cris Carter), even when combined with consistent team success (Andre Reed), no longer guarantee a wide receiver a bust in Canton.

But Hines Ward, the all-time leading receiver of a franchise that already has a pair of Hall-of-Fame wideouts, has as good a case as any receiver for a bust among the game’s greats.

Ward’s production as a pass-catcher is even more imposing when one considers that over the duration of his 14-season career, the Steelers were the NFL’s most run-heavy offense. Pittsburgh ran the ball on 48.8 percent of its plays from 1998-2011. No other team ran the ball on more than 47 percent of its snaps over that span.

More so than in any other sport, wins and losses aren’t attributable to a single player in football. But the Steelers' success with Ward on the roster can’t be discounted. During his career, the Steelers won 140 regular-season games, third-most behind the New England Patriots and Indianapolis Colts. Pittsburgh’s 12 postseason wins over that span were second to only New England.

There is also the matter of Ward’s two Super Bowl rings, and his strong play in the Steelers' Super Bowl XLV loss. The MVP of Super Bowl XL, Ward had 244 receiving yards in his three Super Bowl appearances, seventh-most ever in the Super Bowl. And only Jerry Rice (151) caught more passes than Ward (88) in postseason history.

Although catches, yards and touchdowns are the most important items on a wideouts Hall of Fame résumé, shouldn’t a receiver’s performance on running plays also be part of the equation?

It is here where Ward, regarded as one of the greatest blocking wide receivers in league history, differentiates himself from the group of receivers waiting on a call from Canton.

Ward’s blocking helped the Steelers rush for nearly 129 yards per game from 1998-2011, more than every team except the Denver Broncos and Jacksonville Jaguars. Even last season, when the 35-year-old Ward was on the field for fewer than half of the Steelers offensive plays, Pittsburgh’s rushing game was markedly better with Ward in the game. The Steelers averaged 5.3 yards per rush with Ward on the field compared to 4.1 with him on the sideline.

The line of wide receivers waiting for a spot in the Hall is long, but Ward’s career résumé on one of the league's most successful franchises could earn him a spot near the front.