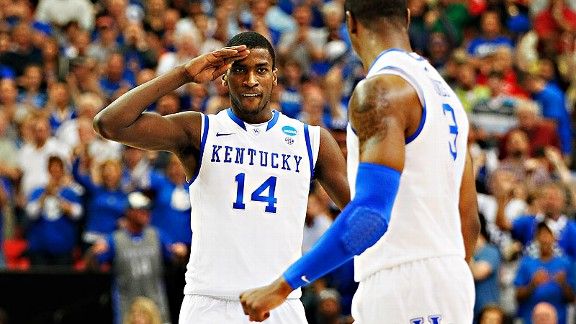 Michael Kidd-Gilchrist led Kentucky with 19 points as the Wildcats advanced to their 15th Final Four.

Big Blue Nation celebrated once again as the Kentucky Wildcats cruised to an 82-70 win over the Baylor Bears and advanced to their second Final Four in as many seasons. It’s the first time the Wildcats have made consecutive Final Fours since going three years in a row from 1996 to 1998.

Kentucky’s scoring spree continued with its fourth game in a row reaching at least 80 points. The Wildcats are the first team to score 80-plus in four straight games in a single tournament since the 1998 Kentucky team did it five times in a row en route to its national championship, according to the Elias Sports Bureau.

Kentucky confirmed its status as the favorite in the tournament, winning each of its first four games by double digits. The Wildcats are the sixth team to do that since 2000 and the first since North Carolina in 2009. Four of the previous five teams went on to win the title that year.

Kentucky pushed the pace against Baylor, dominating the Bears on the break en route to the 12-point win. The Wildcats outscored Baylor 17-5 in transition, including 11 points in the first half as they built a 20-point halftime lead.

Kentucky entered Sunday's game with 70 transition points in the 2012 NCAA tournament, the most in the field.

Anthony Davis led the way on both ends of the floor with 18 points, 11 rebounds and 6 blocks. Davis now has 175 blocks this season, setting the SEC single-season blocks record by passing Jarvis Varnado, who had 169 in both the 2008-09 and 2009-10 seasons.

Michael Kidd-Gilchrist was the most efficient Wildcat, scoring a team-high 19 points on 7-of-10 field goal shooting and was a perfect 4-for-4 from the charity stripe. Kidd-Gilchrist has scored 43 points in his past two games, after totaling 26 in his previous four games combined.

The Bears couldn’t find their shot in the first 20 minutes, making just 7 of 24 field goal attempts (29 percent) in their half-court offense. That was the worst half-court shooting performance in a half for Baylor in an NCAA tournament game over the past three seasons.

Baylor also failed to take advantage of its second-chance opportunities. The Bears had 16 offensive rebounds but scored only 14 second-chance points, making just 4 of 13 shots (31 percent). Entering Sunday, Baylor had converted 53 percent of its second chances in its first three games of the tournament.

One of college basketball’s most intense rivalries is renewed as Kentucky moves on to New Orleans to face the Louisville Cardinals in a national semifinal game. This will be the 44th all-time meeting between the Bluegrass rivals, with Kentucky owning a 29-14 edge, including a 69-62 win on New Year’s Eve this season.