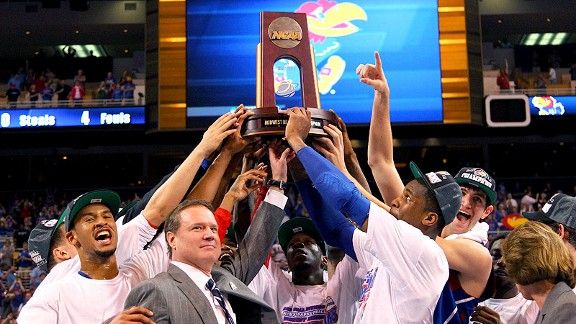 Kansas head coach Bill Self (second from left) will try to guide the Jayhawks to their second national championship in five seasons.The Kansas Jayhawks will make their 14th Final Four appearance when they take on Ohio State on Saturday. It's the fifth-most appearances in NCAA tournament history.

Here are five things to watch for Kansas this weekend.

National player of the year candidate Thomas Robinson has been the steady hand guiding Kansas during the tournament.

He's averaging 15.8 points and 12.5 rebounds during the tournament, posting a double-double in three of the four games. For the season, his 26 double-doubles leads all Division I players.

Much of his offense has come in the painted area. Robinson leads players in the field with 47 field goal attempts in the paint, eight more than any other player.

Senior guard Tyshawn Taylor’s 2012 NCAA tournament get off to a slow start.

But the guard showed up big in the Jayhawks’ Elite Eight win against North Carolina. He poured in a game-high 22 points, filling up the box score with six rebounds, five assists and five steals.

But Taylor did commit three turnovers, and has committed a total of 13 turnovers in the 2012 NCAA tournament, tied for the most in the field.

For Kansas to be successful Saturday, they’ll need Taylor to be more efficient in the half court. Twelve of his 13 turnovers in the tournament have come in half-court situations.

Withey helps anchor a Kansas defense that has allowed just 24.5 points in the paint per game, tied with Louisville for tops among the Final Four teams.

Self has not been afraid of changing things up these past few games, twice switching to a triangle-and-two hybrid zone defense to help win a tournament game.

In the third round against Purdue, Kansas went to its hybrid zone down eight points in the second half and won by three. In the Elite Eight, Kansas made the switch leading by five and won by 13.

Kansas leads all tournament teams with 59 offensive rebounds and 61 second-chance points. The Jayhawks have scored 23 percent of their points on second chances during the tournament, the highest by any team that played two games, and up from 15 percent during the regular season.

Robinson leads the team with 15 offensive rebounds in the NCAA tournament, followed by Kevin Young (12).