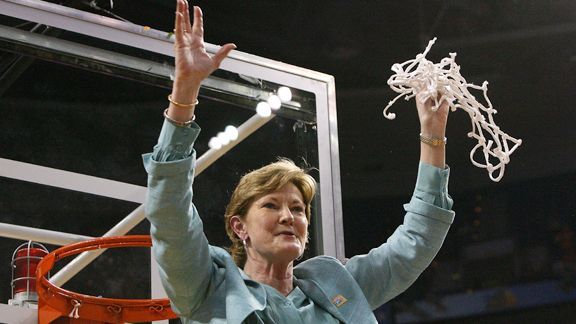 Pat Summitt got to cut down the NCAA championship nets eight times in her coaching career.

Pat Summitt’s head coaching career with the Tennessee Volunteers ends with her at the statistical summit of both men’s and women’s college basketball coaches.

Summitt won 1,098 games and eight national championships in a career that spanned 38 seasons.

Most Wins
Division I Women's Basketball

Her teams made 31 NCAA Tournament appearances, appearing in every one since 1982.

Summit won 83 percent of her NCAA Tournament games. Auriemma is the only coach with a higher winning percentage in either men’s or women’s basketball (.833-- minimum 20 tournament games coached).

They reached 18 Final Fours. Summitt was rewarded at season’s end with national Coach of the Year honors seven times.

She coached 12 Olympians at Tennessee, and also won a Gold Medal as head coach of Team USA in 1984. She also coached 20 All-Americans.

Summitt’s eight national championships are the second-most of any men’s or women’s Division I basketball coach, trailing only John Wooden.