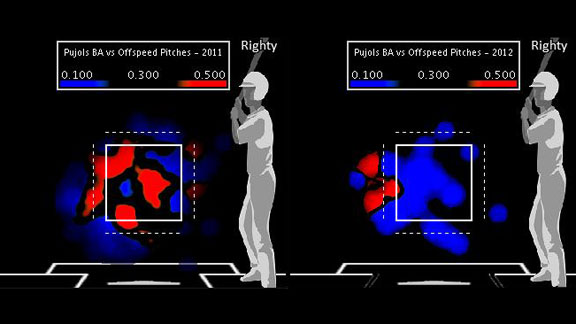 Pujols has not recorded a hit in his last 19 at-bats. According to the Elias Sports Bureau, that is the longest hitless streak of his major-league career. He failed to get a hit in 18 consecutive at-bats from August to September in 2010. It is only the fourth time in his career that Pujols has gone more than 15 straight at-bats without a hit.

Dating to last season, he has failed to hit a home run in his last 24 regular-season games, the second-longest streak in his career. Pujols had 26 straight games without a home run last season.

The home run drought to start the season has reached 72 at-bats. Pujols hit 37 homers last year for the St. Louis Cardinals. Elias reports that his season-opening drought is the second-longest to begin a season by a player who hit at least 35 home runs for a different team the previous season. After hitting 46 home runs for the Washington Nationals in 2006, Alfonso Soriano didn’t hit a homer until his 75th at-bat for the Chicago Cubs in 2007.

• Robbie Ross picked up another win in relief for the Texas Rangers. Ross is the first pitcher in major-league history to record four wins in the first six appearances of his career as a relief pitcher.

• David Wright hit a two-run homer in sixth inning to move past Darryl Strawberry for the most RBI in New York Mets history. Strawberry had 733 for the club, and Wright now has 735.

• Jordan Zimmermann allowed a run in the fifth inning for the Nationals, snapping a franchise-record 26-inning scoreless streak for Nationals starting pitchers.

• Pablo Sandoval extended his hitting streak to 18 games. That ties the Giants franchise record for longest hit streak to start a season. Johnny Rucker hit safely in 18 straight games to start the 1945 season.