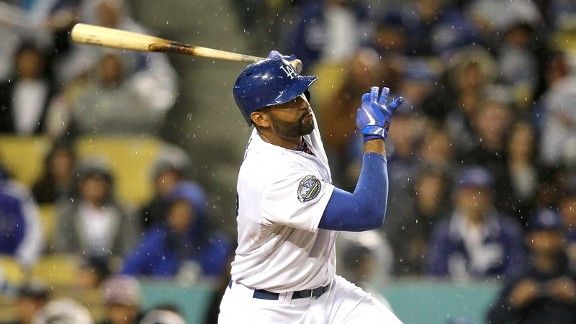 Matt Kemp is the fifth player in history to hit at least 12 home runs before May 1.

ESPN's Home Run Tracker analyzes video of each home run hit this season and as far back as 2006. Each month, the tracker will detail the best and worst home runs, as well as some other interesting statistics pertaining to the long ball. Below are the notable home runs for the month of April.

On April 15, Cleveland’s DH hit a home run of the Royals Luis Mendoza, the longest HR of his career. Hafner’s previous long was 454 feet in 2006. The 481-foot shot is the longest HR by an Indian since the beginning of our database (2006).

On April 24, Upton hit a home run off Ervin Santana that hit off the left-field foul pole. Chris Iannetta hit a 324-foot HR off Phil Hughes, the only other player this season to hit a home run less than 345 feet.

Ervin Santana, who gave up the shortest HR of the month, also gave up the lowest apex. On April 13, Santana served up a 349-foot solo shot to Granderson that had an apex of 49 feet. Scott matched Granderson with a 387-foot laser off Mark Lowe, which also never got higher than 49 feet off the ground.

Even the best need help from time to time. On April 26, Cabrera hit a 382-foot home run off Hector Noesi, but a 15 mph wind gust helped the ball carry an extra 62 feet. Without the wind, it would have been a routine fly out.

In addition to giving up the shortest and the lowest apex home runs, Santana’s 10 home runs allowed traveled a total distance of 3,844 feet.

Thirty-eight HR have been hit in Rogers Centre thus far, with a total distance of 15,072 feet. Chase Field in Arizona finished second, totaling 12,803 feet. Conversely, only six HR were hit at AT&T Park in April.