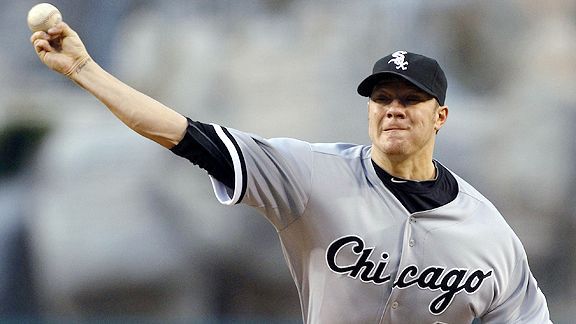 When the Chicago White Sox acquired Jake Peavy toward the end of the 2009 season, they anticipated they were getting a Cy Young-caliber pitcher.

Turns out, they had to wait three years for that to happen.

In his seventh start this year, Peavy held the Cleveland Indians to one run in seven innings of work, improving to 4-1 this season with a 1.89 ERA.

His fast start is comparable to the one he had during his Cy Young Award-winning season in 2007, when he also started 4-1, with an even-lower 1.75 ERA.

But the 2012 version of Peavy is much different than in past seasons.

To make up for a decline in velocity, Peavy has exercised control. Among American League starting pitchers, Peavy's strikeout-to-walk ratio of 6.29 is tops. Peavy's never finished a season with a strikeout-walk ratio higher than 4.32 (2005).

On Wednesday, Peavy got the Indians out of character, getting them to expand their strike zone, something they’ve done less often than any team in baseball this season.

Jeter• With a hit in his first at-bat Wednesday, Derek Jeter became the first player in New York Yankees history with at least 50 hits in the team’s first 30 games of a season, according to the Elias Sports Bureau.

Looking way ahead, if Jeter plays 148 games this season, at his current pace, he would finish this season with 197 hits. That would give him 3,285 career hits, which would put him two past Willie Mays for 11th on the all-time list.

If he maintained a 197-hit season pace, Jeter would get his 4,000th career hit sometime around the All-Star break of the 2016 season. He still would not pass Pete Rose on the all-time hits list until sometime toward the end of the 2017 season, when he'd be 43 years old and would end that season with 4,270 hits. Rose has 4,256 career hits.

• The New York Mets swept the Philadelphia Phillies on the road and they trailed in each of the three games. It's only the third time in franchise history the Mets won a road series of three or more games despite trailing in each of those games, according to Elias.