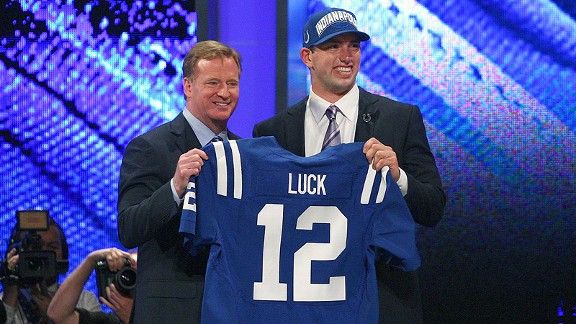 Andrew Luck was the first of eight offensive players drafted by the Colts.

It generally takes a few years to properly judge an NFL draft class since picks need time to develop. There are some though who hope their team’s draft provides a quick fix to a position or to an entire unit.

Five teams used at least 75 percent of their draft picks on one side of the ball in this year’s draft. The New England Patriots (six of seven), Seattle Seahawks (eight of 10), Detroit Lions (six of eight) and Green Bay Packers (six of eight) went heavy on defense. The Indianapolis Colts (eight of 10) loaded up on offense.

When teams have gone mostly offense, their scoring has usually decreased the following year. Twelve of the 18 teams that went this path saw their scoring decrease the following season by an average of nearly three points per game.

When teams have gone mostly defense, the results have been less one-sided.

Seven of the 15 teams that went this route allowed fewer points the following season. These teams allowed just over five points per game fewer on average. Seven of the 15 teams allowed more points the following season, with those seven averaging approximately four points more per game. The 2009 Atlanta Falcons, who used seven of their eight picks on defense, allowed the same amount of points in 2008 that they did in 2009.

The other side of the ball wasn’t affected as much by this strategy. Eight teams scored more after going heavy on defense while seven scored less.