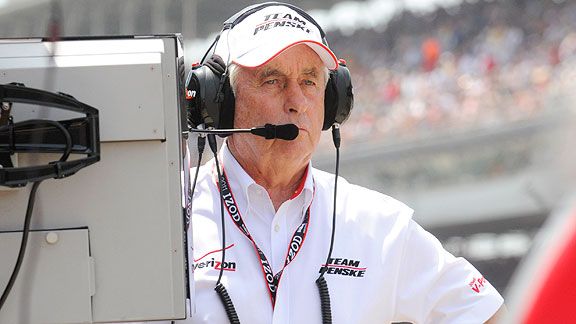 Owner Roger Penske has 15 wins and 16 poles at the Indianapolis 500, both of which are records.May is upon us and Team Penske’s engine is running on full power with qualifying for the Greatest Spectacle in Racing starting this weekend.

Piloting the Captain’s ship is 31-year-old Will Power. At the last IndyCar race in April, Power became the first driver since Scott Dixon in 2007 to win a third consecutive race.

Power has dominated the series in 2012. Out of 350 total laps run, Power has been on point for 111 of them (32 percent). He is the fourth driver in history to enter the Indy 500 on a three-race win streak and first since Bobby Unser in 1968. Unser went on that year to win his first of three Borg-Warner trophies.

Power’s Brickyard resume is mixed. In four career starts, he has finished no lower than 14th. However, he’s managed to lead only five of his 799 laps he’s raced. In 2010, he started on the front row and posted the race’s fastest lap, but surrendered the lead to eventual winner Dario Franchitti.

Power has the luxury of racing for Roger Penske. No owner has dominated at the corner of Georgetown and West 16th like Penske, who is celebrating the 40th anniversary of his first 500 victory with driver Mark Donohue.

Overall, Penske has compiled 15 wins and 16 poles at Indy -- both race records. Since 2001, Team Penske has won this race five times. Helio Castroneves scored the team’s last victory in 2009.

On May 27, there’s an excellent chance a Team Penske driver will be leading the field to the green flag. That's because Team Penske has won the pole four of the previous six years.

Penske will have three chances to win his 16th Indianapolis 500. Castroneves and Ryan Briscoe could deliver that, but the primary focus will be on Power, who has won 18 of 91 career IndyCar starts (19.8 percent).

However, only one of those wins took place on an oval course. In fact, Power is 1-for-28 on ovals. His lone win came in the second race of the Texas doubleheader last June.

Power will try to join Scott Dixon (2008) as the only Australian winners of this race.

Penske enters May with wins in each of the season's first four races, the first time he's done that since the inception of CART 33 years ago.