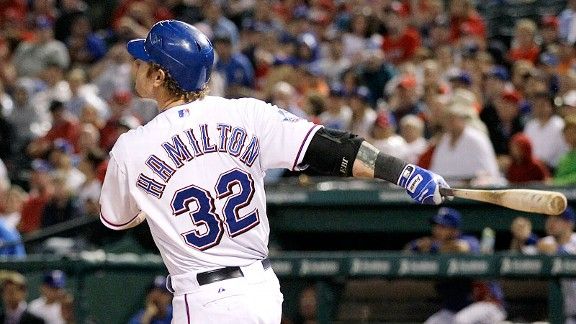 Rangers OF Josh Hamilton paced the American League with 12 home runs in May.

ESPN's Home Run Tracker analyzes video of each home run hit this season and as far back as 2006. Each month, the tracker will detail the best and worst home runs, as well as some other interesting statistics pertaining to the long ball. Below are the notable home runs for the month of May (games through May 30).

Maxwell is an extremely unlikely winner. The Astro has just 12 career homers, only four of which went more than 400 feet. But on May 28, Maxwell hit an Alex White slider 471 feet to left at Coors Field.

The Astros may be six games out of first place in the NL Central, but they claim the first two awards. Lowrie’s 330-foot home run off J.C. Romero on May 5 was originally ruled a double, but upon further review it indeed snuck over the left-field wall.

Note: There was an adjustment made late from last month which gives Carlos Gonzalez the award for March/April, not Luke Scott/Curtis Granderson.

Stanton had a superb month of May, hitting 12 home runs. One of those was a 462-foot mammoth shot off the recently demoted Jamie Moyer on May 21 – it had a speed off bat of 122.4 mph. It is the fastest speed off bat since ESPN HR Tracker began tracking home runs in 2006.

Minor and Colby Lewis each gave up 10 home runs in May, but Minor wins the tiebreaker by giving up an average home run distance of 406.2 feet to Lewis’ 383.6 feet. Minor gave up six home runs of 400-plus feet, including a 453-foot blast to Wilin Rosario on May 5.

Trumbo averaged 424.9 feet per homer in May, best in baseball. For the season, Trumbo has averaged 422.3 feet per homer, has five shots of 430-plus feet and has only hit one less than 400 feet.