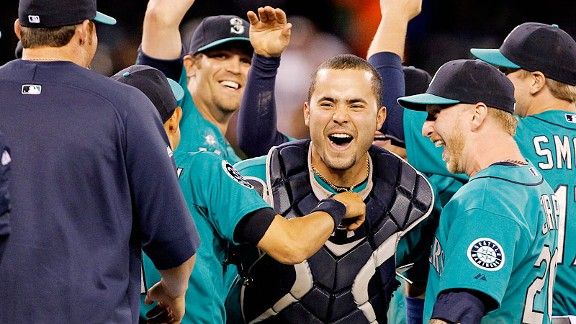 The season's fourth no-hitter brought a smile to the face of Jesus Montero (center).

For the second straight Friday, there was a no-hitter in a major league game, although this one was under quite different circumstances than Johan Santana's historic effort last week.

The Mariners had to go to their bullpen when starter Kevin Millwood left after six innings due to a groin injury.

The Elias Sports Bureau notes that Millwood is the fourth pitcher to throw a complete-game no-hitter and be part of a combined no-hitter, joining Vida Blue, Mike Witt and Kent Mercker.

Mercker is part of another distinction. He was the last pitcher prior to this to no-hit the Dodgers, doing so April 8, 1994, as a member of the Atlanta Braves.

This was the third no-hitter in Mariners history, the first of a combined nature. The other no-nos were by Randy Johnson and Chris Bosio.

Stat of the Game

Elias noted that this was the fourth time since 1900 that the team that entered the day with the best record in baseball was no-hit (minimum 50 games into the season). The Dodgers were the first since the 1990 Oakland Athletics, who were no-hit by Nolan Ryan and the Texas Rangers.

Nifty Time for a No-No

This is the second season to have four no-hitters by June 8, the first since 1917, which had five by this time.

The previous no-hitter in baseball was exactly a week ago when Santana threw the first no-hitter in Mets history.

The last time there were two no-hitters exactly a week apart was September 1965, when Sandy Koufax threw a perfect game for the Dodgers and Dave Morehead threw a no-hitter for the Red Sox.

This is the second straight season that no-hitters have come almost one right after the other. Last season, Francisco Liriano threw one May 3. Justin Verlander threw another four days later.

How They Did It

Millwood threw the game’s first 69 pitches for the Mariners and got 18 outs in an efficient manner.

He kept the ball away from the Dodgers' most potent bats, throwing 41 of 57 fastballs (72 percent) of his pitches to the outer third of the plate or farther away, his highest rate of pitches to that area within the past four seasons.

Strike-throwers Brandon League and Tom Wilhelmsen got the last five outs. Each threw nine pitches, eight for strikes. League got misses on three of the six swings taken against him.

Wilhelmsen sandwiched a pair of ground balls around a line drive to finish out the game. Wilhelmsen has yielded 15 line drives this season, but the one by Elian Herrera was only the second that was caught by a Mariners infielder.

This was the second time this season that Brian Runge was the plate umpire for a no-hitter. He also had the plate for Philip Humber’s perfect game against the Mariners.

Runge is the first umpire to have the plate for two no-hitters in the same season since Drew Coble had it for Dave Stieb and Dave Stewart in 1990.