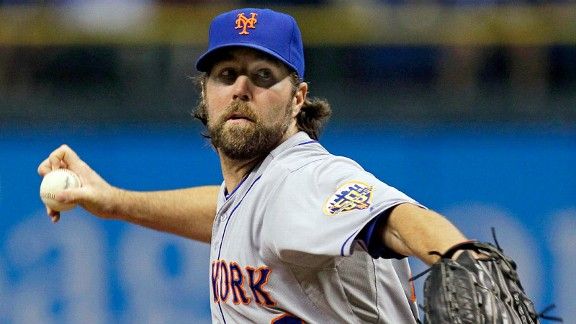 R.A. Dickey is one of two 10-game winners in the Majors this season.

But was R.A. Dickey’s performance against the Tampa Bay Rays even more impressive?

It took 50 years before Santana threw the Mets’ first no-hitter. But side-by-side, Dickey’s performance may be closer to flawlessness.

Keep in mind that Santana’s no-hitter included a foul ball that replays showed may have been a hit and Dickey’s outing included a hit that could have been scored an error.

Most Strikeouts In 1-Hitter
Mets History

Then, consider that Santana struck out eight batters and walked five, while Dickey struck out 12 and didn’t walk a single batter.

Only two pitchers in Mets history have struck out more than 12 batters in a 1-hitter. Those pitchers are both in the Hall of Fame: Tom Seaver and Nolan Ryan.

In the win, Dickey ended a streak of 32 ⅔ scoreless innings. According to the Elias Sports Bureau, that’s the longest streak in Mets history, surpassing Jerry Koosman’s 31 ⅔ consecutive scoreless innings in 1973.

Dickey has now had four straight starts with no earned runs and at least eight strikeouts. According to Elias, no pitcher has had more than four straight such starts in MLB history. The other three pitchers to do so were Pedro Martinez (2002), Ray Culp (1968) and Gaylord Perry (1967).

So how did Dickey dominate the Rays?

• Of his 106 pitches, 100 were knuckleballs. That’s Dickey’s highest knuckleball percentage (94.3) in his Mets career.

• Of his 100 knuckleballs, 55 of them were above the belt, gaining 16 outs (six strikeouts), the most in his Mets career.

• The Rays missed 22 of the 63 knuckleballs they swung at (34.9 percent). The 22 missed knuckleballs are also the most in Dickey’s Mets career.

• Eleven of the 12 strikeouts were swinging.

With the victory, Dickey is now one of two 10-game winners in baseball this season.

That’s rather impressive considering that Dickey has never had more than 11 wins in a season, he was 8-13 last season, he’s 37 years old, and he was in the Minors just two seasons ago.

At 10-1 with a 2.20 ERA and 90 strikeouts, Dickey has cemented himself into the early Cy Young Award conversation. If Dickey were to win it, he’d be the oldest first-time Cy Young Award winner as a starter since Early Wynn, who was 39 years old when he won it in 1959. When Wynn won it, it was just the fourth year of the Cy Young Award, so it’s possible Wynn could have won one earlier in his career if the award had existed.