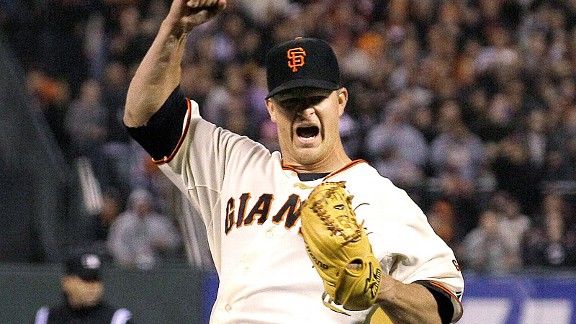 It had never been done by a San Francisco Giants pitcher. It had never happened to the Houston Astros. It had only happened 21 times in Major League Baseball history.

But that was before Matt Cain joined the exclusive perfect game club on Wednesday.

Most Strikeouts In Perfect Game
Since 1900

Cain reached perfection in style. He struck out 14 batters along the way, tying Sandy Koufax (1965) for the most strikeouts in a perfect game since 1900.

Cain's Game Score was 101, the highest of any pitcher since Kerry Wood's 20-strikeout game in 1998 (105). In terms of perfect games, Cain ties Sandy Koufax for the highest ever.

Game Score is a statistic that rates pitchers’ starts (usually from 0 to 100) based on innings pitched, runs, hits, strikeouts and walks. The average Game Score is between 49 and 50.

It’s the 14th no-hitter in Giants franchise history, tied for fourth-most by a team in MLB history, but only their sixth since moving to San Francisco and only their second in the last 35 years (Jonathan Sanchez threw one in 2009).

How did Cain accomplish this feat?

• Eleven of his 14 strikeouts came on fastballs, seven of which were looking. The other three were via the changeup (2) and curveball (1).

• Cain increased his velocity as the game progressed. While he maxed out at 93 mph and threw three fastballs less than 90 mph over the first six innings, Cain threw two fastballs at 94 mph in the last three innings. He didn't throw a fastball less than 91 mph in the 9th inning.

• Cain used the fastball with success to all locations, throwing 66 heaters at an average velocity of 91.6 mph (fastest of the season). Cain changed eye levels with the pitch, gaining at least eight outs in each vertical location.

• With two strikes, Cain mixed his up pitch selection, using each of his four pitches. Along with the 14 strikeouts, Cain got eight more outs in at-bats with a two strike count.

Including Philip Humber’s perfect game in April, there have now been two of them this season. It’s just the third time in MLB history -- Roy Halladay and Dallas Braden in 2010, and Monte Ward and Lee Richmond in 1880 -- there have been two perfect games in the same season.

The only other no-hitter on June 13 was also by a Giant: Christy Mathewson in 1905.

How about some love for the umpires?